Occasionally you need to take the rough with the smooth, because sometimes things can go right for you just when you think they can't get worse. To prove this point, we have an interesting peak of quality standing above the terrible films this week. See if you can guess which one it is!

EXPECTATIONS: Whenever I see a trailer for The Internship, which happens quite often because the marketers apparently went for a saturation blitz, I feel like an outcast, the only guy in the theater who isn't laughing at Owence Vaughnson's shenanigans. The Internship seems a little too overwritten, a little too high-concept, a film in which the humor is inorganic to the characters.

REALITY: The Internship does for Google what Mac and Me did for McDonald's. Both are mercenary movies seeking to humanize a corporation at the height of its unlikability. McDonald's offered Styrofoam wrappers. Google offers invasions of privacy. The only difference is, as best as I can tell, no Google executives produced The Internship. But I'll be gobsmacked if co-writers Vince Vaughn and Jared Stern aren't shareholders.

Vaughn received sole credit for the story, which opens with watch salesmen Billy (Vaughn) and Nick (Owen Wilson) leaving the salesforce after their boss (John Goodman, wasted here) observes that "no one uses a watch anymore. They check their cell phones!" And, he continues, people prefer online shopping to personal interaction with salesmen. Billy and Nick insist that customers still prefer human contact, at which point their boss yells "People hate people!" 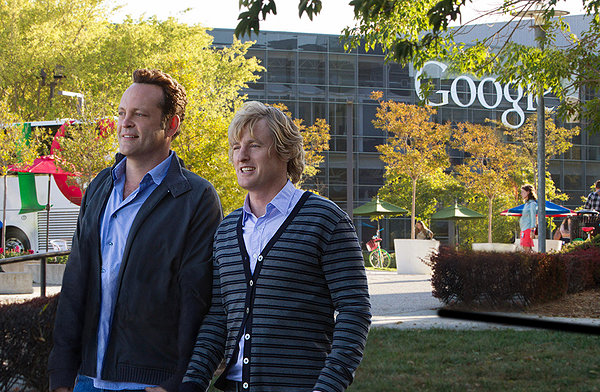 A hidden message... in the background.


In the wake of their layoffs, Billy's significant other gets enough screen time to dump him. Nick eats a slice of humble pie and accepts a job at his brother-in-law's mattress store. Dejected and drunk, Billy applies for an internship at Google, where they're forced to "compete in a mental Hunger Games ... for a handful of jobs." Worse, they're saddled with the strays and the outcasts after the team-picking: Team manager Lyle (Josh Brener), misanthropic hipster Stuart (Dylan O'Brien), geeky cosplayer Neha (Tiya Sircar) and Yo-Yo (Tobit Raphael), whose parents hold such high expectations he self-flagellates when he fails at anything in their absence.

Meanwhile, evil British geek Graham (Max Minghella) conspires to assemble the most well-rounded team possible, which includes a smart chick, a hot chick, a fat dude and maybe one or two other people. If you've never seen an underdog sports movie before and you actually give a shit about The Internship, I would stop reading here. But you'll never guess which two teams end up competing for first place.

See all those characters and actors' names above? That's the supporting cast. The star here is Google, as The Internship strives to legitimize the concept of corporate personhood. The Google logo is in damn near every frame. The Google lexicon (which includes Googlers, Nooglers and Googliness) informs the screenplay. Every couple minutes or so, we're expected to applaud the unusual features of the Googleplex: a cafe in which everything's free, sleep pods, Quidditch matches, etc.

Cinema has a long history of anti-corporate sentiment, so it's hard not to notice when a film displays such reverence for a corporation, even when that corporation's guiding principle is "don't be evil." But it's disturbing when a film actually relies on a corporation to sketch out the moral system to which its characters finally learn to adhere. I'd hesitate to call Google evil, but it's as capable of good and bad as any collective endeavor in which people work toward earning a profit.

The Internship wants us to forget that. Central to espousing Google's core values is supervisor Dana (Rose Byrne), who goes from ice queen to love interest after a heart-to-heart chat with Nick, in which she cautiously admits that she closed herself off to romantic experiences because she believes so strongly in Google's ability to connect people to information and each other that she became a workaholic. After a first date and a $260 restaurant tab (as the movie reminds us, it's a down economy), Nick awkwardly tells her that Google has made him a good person because he can no longer lie to women at bars. "I used to tell them I was an astronomer and make up constellations," he boasts. "Now they can Google the truth." 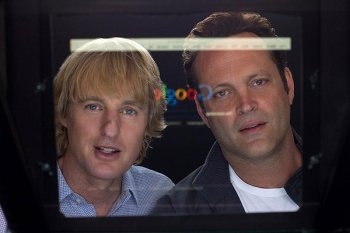 A hypnotic message, but what can it mean?Nick, Nick, Nick ... this is why I lie to women about shit that's far beyond the information-hunting prowess of Google. Can they prove that I'm not Cmdr. John Vincent of Barack Obama's Super-Secret E.A.G.L.E. Squad? That Godspeed You! Black Emperor didn't steal my saw compositions for Lift Yr. Skinny Fists Like Antennas to Heaven? That I never rescued three of Air Bud's pups from the clutches of abusive dog trainers working a regional circus circuit?

The point is that Googlism, like any other prescribed moral code, was developed for people who are too unimaginative, unintelligent or indifferent to develop their own or abandon one altogether. While Billy and Nick actually seem like two Genuinely Good GuysTM, they have succeeded by the end of the film only because they've learned to swallow Googlism straight, no chaser. At first, it seems like Google - and especially Mr. Chetty (Aasif Mandvi), the tightwad director of interns - will actually learn something from these two easy-going Brollyannas, but a last-minute revelation gives Google the upper hand. Google was right all along. Google is good.


Except ... the characters' success at Google eventually hinges on whether the outcasts can convince a small restaurateur to turn his single-location pizzeria into a franchise, despite his reservations that this might affect the freshness and quality for which he is known. If this whole "big business teaches small business to grow comfortable with big-business practices" sounds familiar, it's because it was the most deplorable plot point in You've Got Mail and it's the most deplorable plot point in The Internship, too. It's one thing to make a film that humanizes a real-world corporation, but it's another entirely to rationalize its own worst practices as something that's good for its competitors or humanity as a whole.

The friction between what's on screen and what bubbles beneath the surface drives The Internship. Characters who range from obnoxious to sociopathic scramble over each other to give us the warm and fuzzies. Female characters have it worse: Even the strong ones are maligned to bring them down to their male counterparts' level. In fleeting moments, it's hinted that Billy may have feelings for Nick, but that's abandoned each time about as fast as you can say "homoerotic subtext." Another week brings another movie that feels like it was written by aliens or maybe robots. This is gonna be a long summer.

MINORITY REPORT: Releasing this movie on this particular weekend is one of the strangest encounters of life colliding with art I've ever seen. What's a worse sin: The millions of American citizens' search histories and online activities that Google may or may not have given the government's PRISM program completely willingly, or the fact that Google chose to be actively involved with this movie? Truly a question for the ages. - Martin R. "Vargo" Schneider