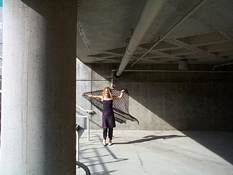 Watching this psychotic woman dance in the parking garage was more amusing than our "meeting" with Activision.

Our meeting with Activision was at 3:00, so we arrived at 2:50 and checked in. They told us that somebody would be by shortly to show off their new stuff. 30 minutes later, we were still waiting, so we took a look at the nearby "Return to Castle Wolfenstein" display that Grey Matter Studios had up. Players were rushing through grey castles, shooting grey weapons at each other and kicking in moderately grey doors. Yes, there is a key you bind to "kick", just like in good ol' Duke Nukem 3D. In addition to this, players are also able to throw things like grenades and chairs. Dave "Octane" Morrison, who happened to be standing by us, remarked on how silly the throwing looked, when Drew Markham from Grey Matter Studios materialized out of nowhere and commented how useful the throwing feature was, and how much fun you could have with it. I then assaulted him with yet another barrage of questions that are undoubtedly on every gamers' mind:

ME: "So can you pick up and throw other players around like in 'River City Ransom'?"

Drew Markham: "Nope. But you can throw chairs and grenades and some other things."

ME: "Are there dinosaurs?"

Hair Giant: "What about invisible dumptrucks?"

We also suggested a "Jerry Springer" mod, since players can throw chairs, but he had put us on his mental ignore list by that point.

One hour later we were still waiting for somebody from Activision to respond to us. The Hair Giant had asked them to page our PR rep four more times, yet he never showed up. Our meeting with Activision was nearly as productive as our previous encounter with VR1, only more frustrating. We checked out many of the game booths they had to offer, and since there was no PR person to give us a rundown of them, here's our untainted look at their upcoming titles:

"Vampire: The Masquerade" - Looked fairly interesting, but not enough to justify everybody's orgasmic hype over it. Then again, I was let down when I found out you couldn't play as Count Chocula, so perhaps I'm biased.

"Fighting Frenzy" - One of those hyperactive Japanese robot games where you die instantly upon starting a new game. Made for children with short attention spans and the desire to blow up everything within a 500 mile radius with missiles that shoot out every direction from every skin pore.

"Spiderman" - Slightly less fun that the original "Spiderman" for the Atari 2600, with not as much action and a lower polycount. Spiderman fights like a flaming homosexual as well.

"X-Men: Mutant Melee" - Just like the 50,000 other fighting games out there, only the faces of popular characters from "The X-Men" have been pasted over the fighters' bodies.

So, in summary, Activision had more important things to do than deal with the press (or at least us), like perhaps beating grade-school children into drawing new animals for "Cabela's Big Game Hunter Challange Arena Tournament 8." I hear the "Fire Shooting Leopard-Giraffe Robot" is going to be excellent!