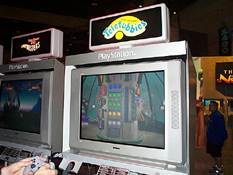 If we couldn't figure it out, how the hell are kids supposed to? Assuming we're smarter than kids, that is.

Ochnop and I tried to play the "Teletubbies" game, but neither of us were intelligent enough to manipulate through the enigmatic gameplay system. You would control your fat character around some kind of UFO thing, and then he would walk into random objects which would cause random blooping noises to go off. It utilized the full extent of the Playstation 2 controller, as every one of the 68 buttons performed an equally bizarre and unpredictable function. Some made honking noises. Others caused carnival music to start playing. All buttons seemed to vary in function from one instant to the next, making it near impossible to play. I pity any child who's parents purchase this game for them.

Next to the "Teletubbies" game was something called "Wacky Racer." In one of my more naive moments, I thought that it was something like "Wacky Wheels." Oh, I was so wrong. This game was even more frighteningly awful than "Teletubbies", challenging the player to drive painfully cartoonish vehicles across intensely stupid racetracks. The characters inside the vehicles looked like potatoes with eyes drilled into them (only with less personality).

There was also a racing game called "Eighteen Wheeler: American Pro Trucker", which aimed to satisfy the millions of gamers out there who love controlling large, slow vehicles that deliver crates full of produce. I don't think any dancing or relationships were involved, but I didn't play it long enough to honestly tell. Maybe there was a disco hall in the back of the truck, or perhaps you could date other truckers. I don't know.