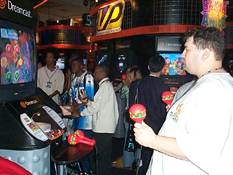 This guy "gets jiggy wid it" by holding the electronic maracas and shaking vigorously.

En route from the VR1 room to the Sega booth, we were assaulted by a band of floor whores who were dressed in bright, shiny plastic 70's clothes and neon hair. They were promoting a bizarre Japanese Dreamcast game about dancing in space stations or some equally ludicrous idea. "Dancing" was a major theme of this year's Japanese E3 influence, narrowly replacing "fishing" and "relationship games". There were dancing games where you had to control your dancer by pressing hundreds of different buttons. There were dancing games that involved dancing on a floor mat. There were dancing games that challenged you to shake maracas to the beat. This is obviously because the Japanese love the idea of dancing, but aren't able to do it without the aid of some kind of electrical device. Perhaps it's a psychological problem.

Another huge Japanese theme was (once again) "Pokemon". Nintendo's entire section was devoted to the colorful little monsters, and offered such quality products as "Hey You: Pikachu!", which forced users to shout commands at Pikachu via a tiny yellow microphone on the N64 controller. For example, the Nintendo PR lady would shout "Dance Pikachu!" and a tiny bubble would show up on screen and float into Pikachu's head. Then he would go off and do various things, none of which included dancing. In fact, Pikachu would almost never do what she begged and pleaded for. The Nintendo PR lady got frustrated and attempted to laugh it off, but we both knew she was secretly hurting inside. Ochnop and I questioned her repeatedly about it.

NINTENDO PR WOMAN: "It's for fun, and to teach children."

ME: "Teach them what? Learning how to cope with failure?"

OCHNOP: "Maybe to teach them about mind control?"

ME: "That's a good idea, because my parents didn't teach me about mind control, and I had to learn about it on the streets."

PIKACHU: (grumbling and walking away)

NINTENDO PR WOMAN: (angry) "I think maybe it's too noisy in here."

She wasn't particularly amused, but we were. We had to leave the Nintendo booth shortly afterwards, because some people in cartoon character outfits were approaching us and I didn't really want to have to deal with that. 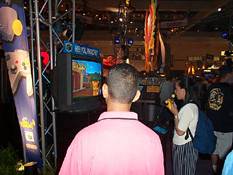 A small Asian girl futilely pleads for Pikachu to "do something".