The Oiled Chest of the Scarlet Buccaneer 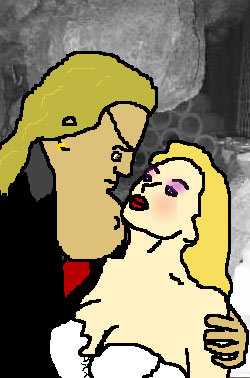 Daring the Scarlet took her by the bodice and ravished her like a puppy ravishes an unattended satchel containing roast beef.With the all of the strength of his undeniable masculine sex-appeal, Daring the Scarlet tore off the rest of Holly McClaren's tight bodice. Keep in mind that this was before bras were invented. Seriously, I'm almost positive without doing any research or really having any idea at all, so she was naked from the waist up. She gasped with delight as his warm hands roamed across the imposing swell of her bosom, like two rats looking for the delicious cheese that - when discovered - they pinched repeatedly and gently twisted.

"Oh my," remarked Holly, who was quickly discovering that it was a wonderful and empowering thing for a woman to be gently raped by a handsome pirate.

"Your breasts are like the bounty of a king," commented Daring the Scarlet as he clutched them like a crab clutches part of a dead bird when it's walking sideways.

He pushed her back against one of the casks of beer, pulling her skirt up to her waist so that her lower body resembled nothing so much as a flower crossed with a twin-pop Popsicle. A really sexy twin-pop that had wooden sticks that were bent at weird angles and was wearing a pair of miniature lady's bloomers. Daring the Scarlet cared not for the concerns of popsicles, pulling her bloomers roughly down and eliciting another moan from the excited Holly.

"Oh yes," she gasped as he stood between her legs and began to unfasten his unnecessarily complex pirate belt-buckle. "Your caress is burning hot and fills me with ecstasy."

Despite her comment to the contrary the effect of contact-friction on his body's surface temperature was negligible and his caress was at best tepid. At last the length of his erect mizzenmast was revealed to her, swaying slightly in the drafty air. Before she could comment on it he sent his battering ram plunging into the depths of her fortress stronghold, where it quickly pushed aside the portcullis of her innocence and ran amok through the subterranean passages of her lust. He rode her like a goblin riding a broomstick and yelled out his every pleasure as though he were the town crier reading a list of words banned by the constabulary. Holly's cheeks were flushed and her face locked in an expression that fused pleasure and concern for her internal organs.

"I have sunk seven galleons in my day," Daring the Scarlet bragged, only making her even more aroused. "I have plundered the doubloons from a hundred chests, and your treasure be the finest of them all."

Here is an arbitrary bottle of champagne being opened.Flattered by his suave rape pillow-talk she began to gyrate against him, the scene of their lover's embrace not at all unlike the curled legs of a dead spider with a picture of news anchor Tom Brokaw balanced on top of it. In the guttering light of the wall sconces that I am just now mentioning for the first time they both cried out as one, the plateaus of passion attained, the expedition to Mount Orgasm a success, the weary love-porters enjoyed their gooey respite in the warm folds of the summit.

"I love you whatever your name is," said Holly McClaren, still slightly out of breath.

"Yeah, I know." Daring the Scarlet said as he totally dissed her by turning his back and putting his clothes on.

His comment backfired, however, as nothing could stop Holly from following the incredibly handsome pirate captain to the ends of the earth.

"Arrrrr," said Daring the Scarlet as he secured his pirate hat on his head. "Now I got a bank to be robbin', let me know if ye be needin' any more of the strong affections of a scallywag such as myself again."