Life as We Know It; Secretariat; My Soul to Take

It's a rough time for film audiences, with early October churning out the films that aren't entertaining enough for Summer and not prestigious enough for Winter. This weekend, we see the arrival of new Katherine Heigl vehicle Life as We Know It, much to Joseph "Jay Dub" Wade's dismay; also on the agenda are Scretariat and My Soul to Take, both destined to be forgotten within the week by Martin R. "Vargo" Schneider and Sean "Keanu Grieves" Hanson respectively.

EXPECTATIONS: A title like Life As We Know It pretty much guarantees that this movie will not only teach me nothing about Life As I Know It, but also will in no way actually resemble Life As Anyone Knows It. And given that the movie stars rom-com punching bags Katherine Heigl and Josh "I'm an action star, dammit!" Duhamel, it's pretty clear that what I'm really in for is a Parody Of Life As We Know It.

REALITY: Have you ever seen an episode of a sitcom? Doesn't matter which sitcom; pick one. The Andy Griffith Show, Seinfeld, that one show about the nerds, etc. They all follow the same formula. One character gets into trouble before the first commercial break, they fail to fix the problem before the second commercial break, and everything is magically made right again before the end credits. It's a simple formula; that's why TV has been using it for the past sixty years.

Now, try to imagine a sitcom that isn't funny, has no commercial breaks, and lasts for two straight hours. That's what Life As We Know It is like. Coincidentally, it's also what I imagine it's like in the circle of Hell reserved for hypocrites and falsifiers.

Life As We Know It begins with a blind date between average joe schlubb Messer (Duhamel) and uptight socialite Holly (Heigl). The date disintegrates before they can even leave Holly's place, but they wind up seeing a lot more of each other thanks to their best friends getting married and having a baby in the longest montage I've ever seen. Soon after the baby's first birthday, Holly and Messer get the call that their friends have died in a car accident. As per the couple's will, Holly and Messer become the baby's legal guardians. How are they going to get out of this pickle? Will they learn to tolerate each other in order to raise the baby? Will love bloom between these two irritating assholes? Tune in next week to find out!

Actually, no, you're going to find out in the next ninety minutes whether you like it or not.

According to Wikipedia, Life As We Know It is somehow classified as a romantic comedy. This, unfortunately, is a misnomer on both counts. For one, there's no romantic chemistry between Heigl and Duhamel at all. The two spend so much energy just trying to play their respective types that they rarely bother playing off one another. When the romance inevitably does develop, it's not because we buy these two people together as a couple. It's because the plot demands it and to do otherwise would anger the Rom-Com Gods. Eros must have these two at arrow-point, because they act as though hooking up would be the worst thing they could possibly do, yet they both agree to it anyway "for the baby." 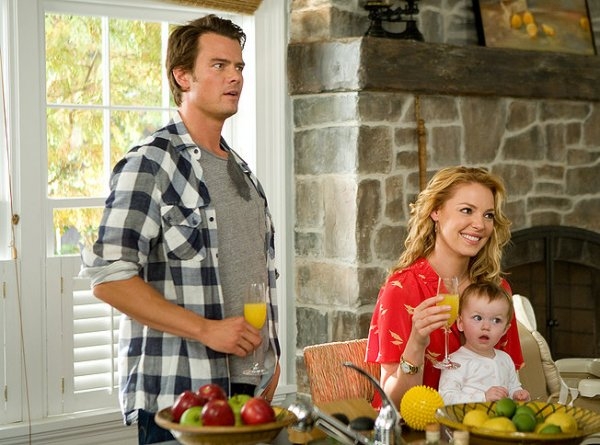 Now, we all know that there's more than orange juice in those glasses, don't we?

The movie fails as a romantic piece, but it's also one of those romantic comedies where the word 'comedy' really isn't an operative word. (You hear that? That's the sound of boyfriends and husbands the world over groaning under their breath.) People will tell you that there are vomit and poop jokes to laugh at. Don't believe them. There's a scene in which Katherine Heigl wanders into frame with baby poop on her face, but that's hardly a poop joke. That's just poop. Even less interesting than poop at Katherine Heigl's expense are Holly and Messer's neighbors. These people put on a happy face and show up periodically to comment on the couple's progress, but mostly they spend their time being a bunch of creeps while commenting on how much they hate their own children and everything they stand for. Even though I'm not the Wiggles' target demographic, I'm not about to break out my plans for savagely murdering them as idle chit-chat, particularly not at a child's birthday party. 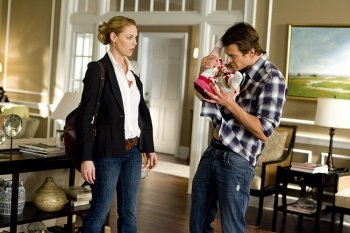 The mothering instinct surfaces as Heigl is absolutely horrified at the concept of nappy-changing.The real tragedy of Life As We Know It isn't the gruesome narrative acrobatics the film conducts to become a sitcom, it's that once it gets there, it decides that getting there was fun enough for one day. The movie then proceeds spin its wheels for ninety minutes. The writers introduce four or five developments that threaten to actually move things forward in interesting directions, but they somehow ruin every single chance by writing things back to the way they were at the start of the episode. Early in the film, Josh Lucas shows up as a romantic interest for Holly, and in his brief handful of scenes he's established as an absolute perfect match for her. He's kind, he has money, he has connections, he's conveniently a pediatrician; he's perfect. There is absolutely no reason for anyone to dislike this character, yet because his presence complicates the plot, the film makes him a non-character with practically no bearing on the actual plot.

And it's not like this is a terrible idea for a sitcom. I'm kind of surprised there hasn't been a sitcom about people ill-equipped to raise a baby. Wait, never mind, Raising Hope just started.

All of these rom-com/sitcom trappings collected in one place have me wondering ... Something like this can't possibly have been concocted by human error alone. All of the pieces of a real movie - a decent movie, even - are present here, but none of them work the way they should. The only explanation is that Life As We Know It was assembled from rejected movie parts at the Romantic Comedy Factory in Culver City, CA. This movie is what a robot thinks people do. It's emotionally tone-deaf, has no sense of humor and makes cold, calculated plot choices based on the parameters of Sitcom Algorithm #4.

If you're in a relationship that has a scheduled date night and you insist on watching something this week, you're better off staying far away from the theater. In fact, if our other reviews are to be believed, this might be a good week for staying in and watching a few sitcoms. It's free, it's less of a waste of time, and you won't be seen in public paying for this garbage. Everybody wins!

MINORITY REPORT: I haven't seen this, but I have seen the trailer in which Josh Duhamel hilariously pushes a baby over because he is terrified of it walking. That seems like the start of one of those "baby in the microwave" scenarios somewhere down the line. -Ian "ProfessorClumsy" Maddison