We return with TSR's 1984 venture into superhero gaming, Marvel Super Heroes, and the second part of our dissection of the Gamer's Handbook of the Marvel Universe: Abomination thru Dreadnought. This is the first of four books that are the closest thing to Monster Manuals that the Marvel Super Heroes line produced. They contain a catalog of villains and allies, great and small, sure to make you say, "WTF!?" 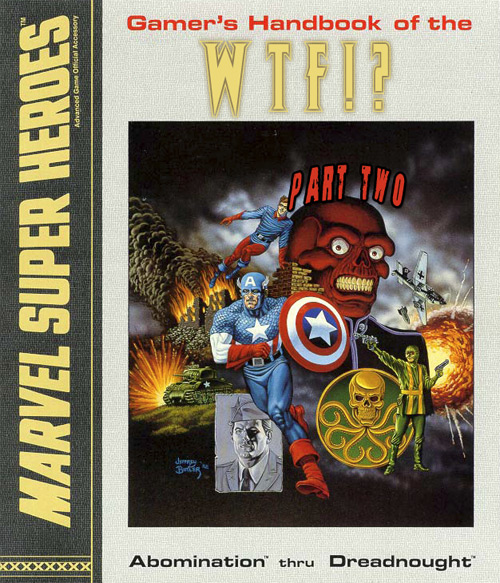 Steve: Can we take a minute before we start to savor this cover some more?

Zack: Try focusing on a point past the picture. Eventually an even cooler 3D skull is going to appear.

Steve: Those were the fun days to be a super hero. When you could lay some haymakers on henchmen without worrying about their families or their backstories. It could just boil down to whether or not they had a golden tentacle skull symbol or a nazi swastika symbol or something.

Zack: I know exactly what you mean. It used to be black and white, now you can't even fire your heat ray gauntlets at a mosque without worrying about the Hague and Wikileaks.

Zack: I have seen interviews with that Wikileaks dude and I promise you he knows how to use a hologram machine to talk to a skull Nazi with a secret base in Argentina.

Steve: Our super villains today are lame. Who is the scariest guy in the world? Osama Bin Laden? His super power is you can't find him and he releases videotapes.

Steve: That Van Der Sloot guy defeated a total of two people and they were teenage girls and then he was outsmarted and arrested by some cops in South America. That's almost as bad as being defeated by Alpha Flight.

Zack: Rod Blagojevich's only henchman is his wife, Patti, and he got in trouble for trying to get her a job.

Zack: Maybe so, but we have a whole bunch of lame super villains to review, so let's get to it!