This article is part of the The Reificant series.

Witness to endings. Failed protector. Wayward servant of a dead Queen. I am torn from my shell by the hands and jaws of the pale men who are not men. I become the static charge whispering through water. Crossing the gulf. Traversing by will the branching rivers through the black. I am made whole. I am ejected from the water with great violence, landing upon the surface of cool metal, my cowl-wrapped limbs in the stroboscopic relief of flashing machine lights. My body is heavy as a leaf tossed by the wind.

Rising on new limbs and ascending a hill of discarded wrappings. The soft-meat stench of the water is all around me, suffusing the air with its fetid heat. Moisture beads upon the dark surfaces of this spire. The flashing lights high above are disorienting to me and I seek an escape. Emerging into a corridor I taste the scent of battle. The acrid odor of the old weapons and the cooked-meat stink.

Stretching before me is a great, gory carpeting of looping innards. Limbs and heads piled up and steaming. Hundreds of the pale men died in this corridor, their bodies transformed by great violence into a singular horror of viscera and bone and dead-eyed faces.

I gingerly navigate through this slaughter until I come upon the source of the violence: a huge, oblong device of arachnid appearance, its hull seemingly carved from black stone. Dozens of the pale men, dead, are clinging to the device's inert body. Its golden limbs are deformed, its crystalline eyes broken and weapons torn from their moorings. By will and weight of numbers the pale men must have overwhelmed this sentinel's potent weapons.

Continuing past this wreckage I follow a distant sound, like a vast and slowly beating drum of River Stone's tribe. This steady throb echoes from corridors lit by softly glowing strips of golden light. When corridors intersect I instinctively know which path to follow, drawn inexorably towards the sound.

The corridor I am traveling opens into an immense chamber, so large that the opposite sides can only be seen as faint lights. A golden edifice stands in this cavernous room and the open corridor passes through its shadow. The sculpture depicts a serpentine being with powerful limbs, the details of its bony face lost to pools of darkness. Around the coiled base of this statue there is a great mound of debris. Something is moving on this hill.

I climb from the corridor and leap, spreading my wings to glide down gently into the debris-scattered plaza surrounding the statue. That debris crunches beneath my limbs and I see that it is a great ossuary, piled high with ancient bones. These crumbling skeletons are unfamiliar to me as are the markings upon the golden cenotaphs arrayed among the remains.

Nearby, a small, golden obelisk I had not noticed emits a shrill tone. I shuffle aside as red light blooms from its cap and a translucent form resolves. It is a being similar to that depicted by the statue. It begins to speak in sibilant tones, seemingly addressing me. Its voice echoing loudly in the cavern. Startled by the sound, small white crustaceans scuttle fearfully among the bones.

I try to quill to this phantom in the languages I have learned, but it does not respond and I become distracted. The movement that originally drew my attention appears once more. A number of my kin are here. They are simple workers, wingless, short-bodied, their heads broader than my own and their limbs suited to hard labor. The translucent red serpent turns to regard them as they approach.

"It is good to see you," I quill to these lesser workers. They do not answer, but continue towards me, drawing into a loose semicircle. They stop short of me.

"What has brought you here?" I ask.

By a process I do not comprehend my dull-eyed kin reveal their truth to me. There is a flare of light within each. Burning, ghostly shapes appear curled within their bodies as if a swallowed fire glows within them. At first I do not recognize these shapes. They are anatomically exposed to reveal layers of tissue, organs, glands, bones and the steady, translucent pulse of lymph.

It is their bulging eyes and the curving dental plates attached to the jawbones of their flattened skulls that I finally recognize. These spectral beings are the pale men, lambent within the host of my kin. As I once slipped into the flesh of the Mummon, so these foul parasites burrow into the flesh of my people. 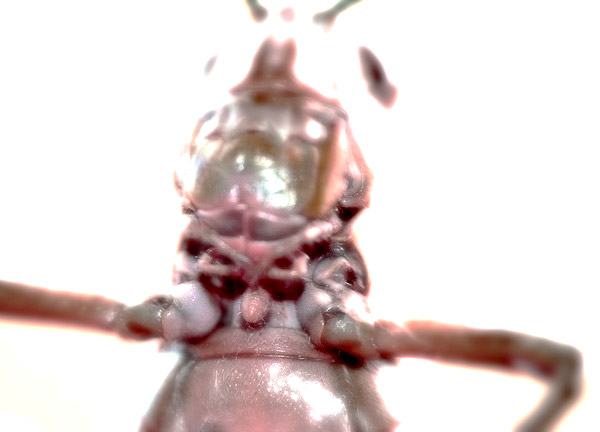 They attack in unison and I expose their folly to them. I was raised from hatchery softness to destroy my own kind. I am a warrior champion and, though I could not protect my Queen, my ability to destroy my people has not diminished in strange times. In moments, fourteen headless bodies lay around me, the ink of their lymph staining the fragile bones spread beneath them. The embers are gone within these bodies. The pale men dispatched along with their hosts.

The glowing serpent turns away from the carnage and regards me impassively. It makes a new sound with its mouth and blinks out of existence, the obelisk's shrill tone attenuates and fades into echoes. I hear again the steady beat of the distant drum and I heed its call, passing out of this vast chamber, leaving behind the semi-circle of headless corpses kneeling before the obelisk as if in worship.

The corridor takes me to a place filled with golden obelisks and the glowing red ghosts of the serpents. These projected spirits move from place to place, trailing glowing beams of light back to their obelisk of origin. They ignore me, so I observe. Red-hued panes manifest from solid black stones, projections that squirm with glowing symbols and shapes and diagrams. It is some form of information display, but it flickers by so quickly it is difficult to perceive meaning or detail. Looping, organ-like structures are superimposed over glowing dots. A map? If so there are more stars than my people ever observed. Various swirling diagrams of conical shapes connected by their tips flash by, faces of serpents appear and disappear on the flat displays.

A resounding boom interrupts the steady drumming and instantly every obelisk and projected display disappears. I am alone in the gloomy chamber of featureless black stone. The drumming resumes, but it is arrhythmic, pained. Whatever truth is to be found in this place must reside with that beckoning sound. Louder and louder. Straining until I can feel it reverberating in my cavities.

Here. A chamber as large as that which contained the statue. Larger. Stretching into an eerie green distance, interrupted by tilting pillars of faded gold. Every surface, every wall, shrouded in a layer of protective gold and the symbols of this people.

Machines like the destroyed device I encountered in the corridor are at work, moving through the air with their legs folded beneath them, spiraling around a great, infinite serpent of white. Like mercury flowing through water, the milky liquid is contained by pulsing meshes of hexagonal energy. The water is imprisoned and these devices are prodding and torturing its surface with lances of glowing white. The source of the drumming is a massive piston, sheathed in gold, slowly working up and down. Each descent of the piston releases a gust of steam and the hexagonal patterns surrounding the water pulse brighter for an instant.

A gallery of crimson ghosts watch this titanic vivisection. I cannot say if this is some strange echo of past events or if these non-beings are interacting with the water in a new way. One of the spectral serpents turns to me, speaks in its hissing tongue, and then points one of its forelimbs across the space to a gallery adjoining the piston.

There is a burst of actinic light followed a moment later by an explosion that shudders the walls and floor. One of the arachnid machines falls from this gallery, burning, shedding dozens of bodies of pale men as it plummets and strikes the glowing hexagonal mesh surrounding the water. It, and the creatures clinging to it, disappear in a flash.

The piston wines and slows its descent. Another arachnid detaches from its position straddling the water and glides through the space towards the gallery. It is too late. The pale men are scaling the walls and climbing towards the piston. Blue pulses of light incinerate the pale men where the arachnid can reach them, but they are too determined and too numerous. I can only watch as they begin to jam their bodies into the piston, reduced to paste, but slowing the progress of the titanic machine. The hexagonal field flickers out for a moment and the floor heaves beneath my feet.

The hexagonal patterns reappear and the nauseating heave ceases. I have no choice but to intervene. I leap from the gallery and spread my wings. Taking flight in the midst of this strange place is disorienting. Above and on every side are galleries filled with red ghosts and the snaking, shimmering body of the water contained, only barely, by the flickering walls of energy. I dip beneath a branch of water and dodge out of the way of one of the flying machines.

A fictional serial serving as a prequel to the novel LIMINAL STATES.