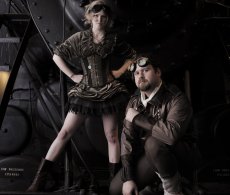 The internet works the same way.

Goggle is a social networking site for steampunk fans. Steampunk is an emergent subculture about to "boil over" into a worldwide phenomenon and Google wants to get in on the ground floor. Goggle features a profile generator that adds zeppelins and steam clouds to existing photos, and converts bio information to Victorian English complete with cockney slang and casual racism. For added authenticity, the site will be hosted on mechanical punchcard servers that fill an entire warehouse and require hourly maintenance by clackers and spindlesmiths.

Google News compiles all its headlines from a search algorithm, which has bewildered many readers used to biased news sources. Google News 2.0 will fix this by allowing the reader to choose from several heavily-biased "filters," including:

Like McGruff the Crime Dog, Google Watch is a watchdog entity that monitors Google for illegal activities, but to quote Alan Moore, "Who watches the watchdogs?" The answer, of course, is McGruff's nephew Scruff, but this is only true for dogs and not people. How do we know that Google Watch, in between watching Google, isn't doing all sorts of illegal things like for instance chasing down our kids and injecting them with Mexican heroin? Obviously we don't, which is why we need GoogleWatch Watch, a site that monitors and reports any crimes committed by Google Watch. "But who will watch GoogleWatch Watch?" you might ask. Simple: since it's owned by Google, Google Watch will watch it. Although you should be wary of anything they say. 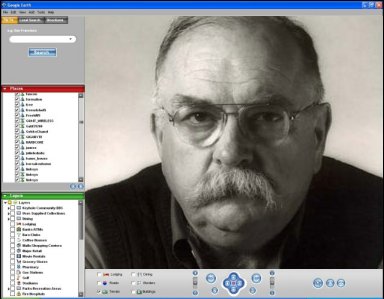 This plugin for Google Earth lets you to explore a 3-dimensional model of Wilford Brimley, mapped with the latest satellite photos of the actor. Clothing can be added or removed via the "Layers" sidebar (default is "rugged outdoor wear"). Gawk at the birthmark on Brimley's chest that resembles an owl. Explore his left buttock where conspiracy theorists say the moon landing was faked. As a bonus, Google Earth Pro users can "journey to the center" of Brimley with panoramic views of his colonoscopy photos. Fun for the whole family!