Then tragedy struck. I was informed that Stabs and Porsche were depressed, as their "Fun" level had hit a critically low valley. I tried to cheer them up by laying down yellow wallpaper all over their bedroom, but it didn't seem to work. I bought a toilet to put in the living room, which I assumed would cheer up at least Stabs. No luck. I eventually had to resort to commanding Porsche to call up their neighbor Betty and ask her to come over. Betty showed up a few minutes later, and I commanded Stabs to make fun of her until she left. This seemed to cheer them up a bit. I seem to know what makes the Felchers tick.

The next day Stabs was promoted to "Lab Assistant" at his job. I'm not exactly sure how or why, but apparently he had what it took (assuming all it took was "being able to wear clothing"). That extra $400 bought the following incredible items: 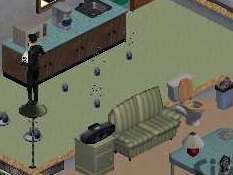 Oh no, the burglar stole my oven! At least the toilet in the living room is safe.

After adding these luxurious items to the Felchers' house, that bitch Betty decided to show up and ruin the moment. At this point I was really fucking sick of Betty, and didn't want to put up with her shit any longer. I made Porsche get into an argument with her, and Betty soon ran back home like the chickenshit she is. I wanted to make Stabs laugh and taunt her, but he was in the shower and wouldn't get out no matter how many times I clicked on his bald ass. To ensure no more repeat visits from the infamous Betty, I walled in my house with the picket fence and pool / pseudo-moat. Sure, I had to fill in the front walkway every time I wanted the Felchers to get in / out of their property, but it was a price I was willing to pay. All these exciting eventually events tired out our heroes, so they went directly to sleep. For some inexplicable reason, Porsche woke up at 5 am, got dressed, and began to grill hamburgers on the front lawn. I hope the software engineers at Maxis didn't spend too long coding the "Early Morning Hamburger Cookout" subroutine, because it was just plain odd.

Another day of hard work brought another fat paycheck, which I spent entirely on a really fancy couch. Since I wanted all the neighbors to be jealous, I put the couch out on the lawn, right next to the sidewalk, so they would pass by and stare in awe of the incredible riches the Felchers obviously had. I also bought about 20 plastic flamingos to put in the front yard, hoping maybe they'd scare away the bill collectors (that didn't work either). Since the Felchers' "Room" stat was getting low, I decided to spice up their house by buying a really big plant and putting it in front of the doorway so they'd see it and be happy every time they entered their home. I tried to force Stabs to relax my making him read a book, but he was "too depressed to study". Since I figured sleeping cures depression, I made Stabs take a nap on the couch by the sidewalk. Right then, the unspeakable occured: while he slept, a burglar broke into the house! Well, he didn't really break in, he just kind of opened the door and walked in. Apparently there's no Sim Locks in this universe. 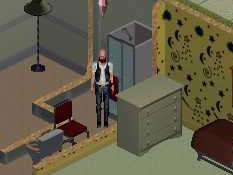 I woke up Stabs and tried to get him to murder the burglar, or at least confront him, but there was no available option to do so. In fact, the only thing I could do was call the Police on their Sim Phone. Stabs was woefully ineffective as a guardian of the house and was limited to whining at the Police about somebody stealing all his possessions (who was less than five feet away from him at the time). The burglar, being a seasoned and grizzled veteran of the criminal industry, went straight to where the money is - the kitchen - and stole my damn oven. Yes, he took the entire oven and somehow shoved it into the bag he was carrying. To add insult to injury, he also grabbed a cactus before he left. I'd imagine the street value a used oven and cactus would fetch is astronomical and could probably be traded for at least 50 pounds of raw heroin. A few hours after the burglar left, a Police officer showed up and said "we couldn't catch the burglar", so I had to end up replacing the stolen merchandise. I could tell Stabs and Porsche were depressed, so I tried to build them an atrium inside their living room. I got some grass growing, but the game didn't allow me to put any bushes or trees inside it, so the area just ended up being "some kind of shrine to asphalt and grass". What a ripoff.

At this point the week was almost over and I was sick of Stabs, Porsche, and their defeatist attitude, so I looked for a way to kill them off as quickly as possible. I really had to hurry because I had invited some people to come over and watch "Troll 2" with me and was really tired of playing The Sims. I tricked Stabs into going to use the shower, and then built walls around it and trapped him in the bathroom, doomed to eat the soap and eventually die of hunger. Since I wasn't able to fully surround the shower with walls, I had to settle for placing an impassible object in his way that he had no Earthly chance to get around; namely, a chair. This ensured that Stabs starved to death in his own bathroom while Porsche, the maid, and the pizza delivery guy ignored his constant screams for help. Apparently people in The Sims ignore the cries of pain from their significant other when they're starving to death and trapped in the bathroom. It's a tough life being simulated. And so ended a week of gameplay in The Sims, as well as the lives of the main characters. What a bittersweet finale.

In summary, The Sims lacks many things that separate it from being a true "real life simulation." For example, you can't build moats or molest burglars. The Sims is indeed a natural progression from the previous simulations Maxis has put out, but there's not a great chance that you'll get it confused with a realistic simulation (unless you enjoy abusing prescription medication). The family of the Felchers never got on any talk show in the week I played them, but they probably survived longer than any contestants of "The Jerry Springer Show" would without being fatally shot to death outside a McDonalds.