These kids have "issues".I had originally intended to write an article about the rockin' boy band Linkin Park for today when my AOL girlfriend noted that eternal cad Scotty D had written an article about Mudvayne and some of those other horrible nu-metal bands. At first I was fairly angry with that incorrigible wretch Scotty D, who had unwittingly stolen a very funny article out from under my nose and had ruined my plans and shit on my proverbial cake. Then I read his article and was reminded that he is a complete retard and his article sucked anyway so I could go ahead and write my Linkin Park article, which coincidentally, is what this is. I just felt the need for a brief forward or prologue if you will, and by God I know you will.

If you have the immense good fortune of never having heard of Linkin Park before then please stop reading now, because I will inform you about them to some degree and you are far luckier having never known they exist. First and foremost, Linkin Park is a fabrication every bit as elaborate, cunning, and well conceived as the most popular boy-band on the market, be they N Sync this week or the Backstreet Boyzzzz or whoever is floating to the top of the MTV septic tank. Market researchers realized that, while the other boy bands addressed the needs of a wide demographic of teenagers and even pre-teens there was still a major reserve of listeners untapped by music conglomerates of America: the outcasts. So the board of directors at Warner Brothers sat down and discussed what common trait was shared by the music collection of all of these outcasts. They did focus groups, surveys, hell they are even rumored to have kidnapped a thirteen year old girl in a Joy Division t-shirt and cut open her skull to analyze the electric activity of her brain.

What it all boiled down to was one word: angst, but the real question was how to make angst marketable to the broadest demographic possible. The answer was deceptively simple. They took a little known ultra-pop boy band singing songs about being manipulated by girls called "Linkin Park", they gave them a "dark" make-over, sort of like putting eye-shadow on their angst, and then they hooked them up with some of the least talented lyricists and song-writers the music biz could produce. A few weeks of intensive training later and Linkin Park, the new, edgier boy band, took the stage in Las Cruces, New Mexico opening with their never-before-heard song "Pumpkin Made of Flesh". 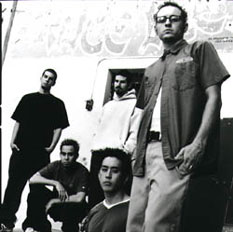 Black and white photography evokes a sense of depth and meaning from the viewer. For example I sense that this picture means that these boys are putting together 8x10" glossy shots for their PR handouts.

Pumpkin Made of Flesh

Why did it have to end this way? (this waaaay)
How much will I have to pay? (have to paaaay)
To disregard this feeling of loneliness,
Inside of me, filling me, hollowing me out,
Like a pumpkin made of flesh.

Now you're gone,
And I'm all alone with this pain,
It's got me full of pain,
And I'm going to do it this time (thiiiiiss tiiiiiime)!

NO MORE CRYING! THE TEARS ARE ALL I HAVE!

I gave you all of me,
And you turned me upside down,
You put your evil inside of me,
In this pool of tears I will drown!

Why did it have to end this way? (this waaaay)
How much will I have to pay? (have to paaaay)
To disregard this feeling of loneliness,
Inside of me, filling me, hollowing me out,
Like a pumpkin made of flesh.

I am surrounded by this futility,
I wish I had never been born,
This useless striving and trying,
Has got me crying and worn.
You dig your nails in,
Innnnnn to my brain,
And you turn my brain,
Into a giant ball of pain.

NO MORE CRYING! THE TEARS ARE ALL I HAVE! 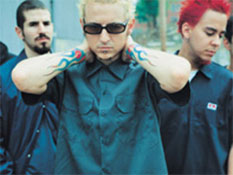 It doesn't get any deeper than this, look how forlorn they are, THEY ARE OBVIOUSLY ABOUT TO BREAK.While this song was still untested with a large audience, it was an auspicious beginning for the fledgling band. Their angst act was refined and after a few days in the studio they had recorded their first album "Hollow Insides Full of Pain". This album was a success, but the band was largely rough around the edges and once their HIFoP tour had ended in 2000 they released their second CD "Hybrid Theory", which took the airwaves by storm.

With harmonization that would put the best boy band to shame, hairdos to make every teenage girl swoon, and moody looks and alternative clothing to let all the guys know that they share their pain, Linkin Park had made it to the big time. I wish this were a VH1 behind the music, because if it was I would now be telling you about Linkin Parks inevitable fall from grace, with drugs and womanizing and probably sadomasochistic homosexuality bringing an end to their young careers. Unfortunately, all of the drugs and erotic asphyxiation have yet to be brought to the public attention, so Linkin Park is still riding high on the horse of popularity. Arr, she be a fickle mare indeed, but while she lasts she is best ridden hard!

The lyrics of Linkin Park are not something to be overlooked either, they are a heady brew of partially complete and mismatched clichés of angst along with a strong backbone of generic pseudo-suicidal depression. Don't believe me? Well mister fucking naysayer, here are a few samples from some of their more popular songs.

"Everything you say to me,
takes me one step closer to the edge,
and I'm about to break."

Okay, so what his gay beating partner says to him takes him towards the edge of what I presume to be a great height, as if he could be plunged off into the abyss at any moment, but instead his fear is that he will "break". Yeah, thems some dandy lyrics boys.

"Crawling in my skin,
consuming all I feel,
fear is how I fall,
confusing what is real."

Let me rewrite this one for Linkin Park:

"Ants are in my pants,
chewing on a crumb,
I'm a big fucking baby,
And my songs are dumb."

That gets the point across a little better I think, but we're not done just yet.

"I tried so hard,
and got so far,
but in the end,
it doesn't even matter."

These lyrics are so utterly effortless that I could imagine a sad twelve-year old scrawling them in his notebook next to clumsy sketches of a guy shooting a gun, which is exactly the point. The band is stupid, their music is uninspired, and their lyrics are idiotic, simple, and pretentious without being confusing. Their lyrics are so simple and so utterly bereft of any real meaning that one of our esteemed SA Forum Goons by the name of Raditts has created a Linkin Park lyrics generator that simulates the song-writing powerhouse behind the band. He assembled the lyrics from suggestions from other forum goers and created a high-tech supercomputer script type thing that randomizes them somewhat and spits them back out. My advice to Linkin Park is to lose their expensive song-writing team and just hit refresh over and over again on Raditts's lyrics generator.

Here's a sample of one of the Linkin Park songs courtesy of Raditts:

I know this article seems to be a raging indictment of Linkin Park, but on the contrary, this is more just a comment on the fact that Linkin Park is what America wants. The other more upbeat boy bands satisfied the needs of the majority of the population and big dumb old Linkin Park takes care of the rest. Listen to it some time, even after reading this article I bet you'll find yourself singing along, I know I do.