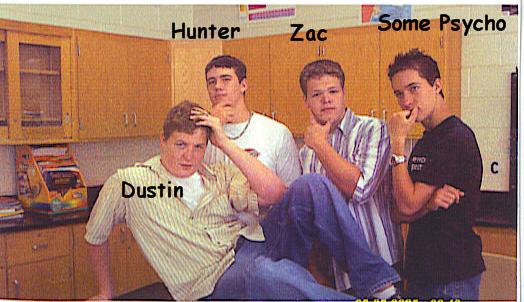 HOLY SHIT... I CAN't BELIEVE I FOUND HER - Good work, gumshoe. On a related note, is Rockapella still around? I was thinking they could do their own version of the BYOB rap.

How badass are you - I punched a gas station clerk after he gave me my receipt because I felt really badass and I couldn't hold it in any longer. A policeman standing nearby congratulated me on my form and let me borrow his Taser to finish the job.

Bump this thread every time you eat poutine - GRAVY AND CHEESE DOWN MY FACE. After two bites I threw the spoon over my shoulder and just dug in with my bare hands. But my jiggly arms are too slow so I went at it with my face! Blowin bubbles in it before opening my mouth to take in another hearty bite of fries. Thumping my gravy-stained hands on my bare chest and howlin' Z0Rrrrrrr so loud that my neighbors pounded the wall in anger. Little gravy fistprints on my belly. Gonna let 'em dry to remind me of the great meal I had. I was on Maury two years ago...what of it?

~*~ The Book Barn ~*~
Reppin': Mr. SM Holocaust
You may be interested to know that people other than social mutants regularly read books.
There are probably only like 4 of them out there, but they do exist.

In addition to the following featured threads, you can find lively discussions going on about Stephen Colbert, Hemingway, George RR Martin, 2007 Nobel Prize Winner Doris Lessing, Frank Herbert, the TBB Book Club and a multitude of ongoing threads about the ins and outs of being a bookworm.

Post-Post-apocalypse fiction?
Forums user Hughlander doesn't just want to see the world as we know it destroyed by a fiery apocalypse, he wants to know how it's being rebuilt. Somewhere out there, Kevin Costner is already trying to raise the funds for an epic movie about a traffic pattern analyst's struggle to bring sanity to a anarchic world where demographics go uncharted.

Should i read more Dawkins?
When seeking ammunition for those late night arguments at Denny's, keep in mind that God has a sense of humor as evidenced by the hilariously brutal saga of the deaths of Madalyn Murray O'Hair and her family.

Temeraire: Napoleonic Wars + Dragons
The mishmash genre of alternate timeline fantasy is best compared to the hard rock band down the street that insists that because their members listen to so many different styles of music that they have come up with something different. In reality it's another tired power trio singing about girls. Not a bad thing when you want to listen to a second rate Grand Funk Railroad. C'mon, everyone has those moments.

The premise is dragons in the Napoleonic wars. Sounds good in an eclecticism-masquerading-as-originality kind of way. Could it go wrong? Definitely. Like Nascar-racer-pinwheeling-into-the-stands bad. The big question is, "Did it work for you?" Drop on in and let us know.

Chaucer, still complex after all these years.
Living in a Puritan country that was so extensively affected by the Victorian era of stuffy manners and vicious sodomy behind closed doors, sometimes we forget just how fun-loving literature used to be. Percivale rode magic beds, Siegfried's wife went all psycho hosebeast, and Chaucer crafted a loving, bawdy tale of some funny things that happened on the way to the Shrine. In this thread, TBBers are discussing not only reading it in its original form but also weighing the validity of certain outside sources and, of course, that darling of feminists everywhere, the Wife of Bath.

Baldfaced cuckoldry, crooked church officials and violating someone's anus with a red-hot poker must be what old people talk about when they miss the "good old days".