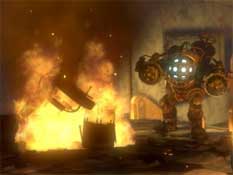 Haha you idiots, you're surrounded by water, there's no excuse to be on fire!2) Mainstream videogame developers, for some inexplicable reason, tend to frown upon murdering children. A core component of Bioshock revolves around your decision to either murder or free innocent cloned children who reward you with brain drugs upon their demise. At this point most of you are probably thinking, "well it's about time somebody released a game where I can kill kids," but much like all the internet pyramid schemes promising to increase your penis size through simple stock investments, there's a catch: it affects the outcome of the game. I don't want to spoil exactly how this works, but let's just say if you murder even one child (in the game, not real life), you receive the "bad ending," 30 minutes of amateur rodeo footage accompanied by an elderly woman reading the coupons from her local newspaper.

3) Try not to ever crash your plane into the ocean, even if it seems "really cool" at the time. If the protagonist would've simply helped pilot his plane to a safe landing strip during the opening sequence, the entire game would've become a vacation simulator. Instead of Splicers with knives for hands and also knives for eyeballs, there would be bartenders who refill your martinis. Instead of Big Daddy robot slave creatures demanding to shoot you in the face, there would be a king-sized bed with little chocolates on the pillows. And instead of being trapped in a dark, never-ending maze of plastic tubes, you'd be hanging out in sunny Hawaii or something, which would be highly preferable unless you were traveling there for an underground Tunnel Town franchise conference. 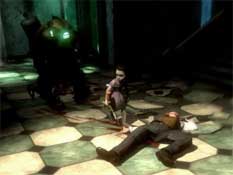 Future Juggalette.As the game progresses and you walk through several hundred thousand miles of deep sea ferret exercise tubes, the plot begins to open up and you soon learn - oh wait, I can't directly mention the plot or else insane, rabid Bioshock fans will track me down and eviscerate me while speaking like SHODAN. Let me consult my Internet Writing Manual to determine the acceptable amount of information I can convey about this game without spreading crucial soul-crushing spoilers:

You find machine gun ammunition next to a toilet.

DON'T TELL YOUR FRIENDS THIS OR THEY MIGHT PUT AN AD ON CRAIGSLIST FOR PEOPLE TO ASSASSINATE YOU IN EXCHANGE FOR A USED BLACK FUTON FRAME.

Whew, hope I didn't ruin anything for you fragile ladies and gentlemen who carved obscenities into your arms when you overheard a 13-year old mention something you believed spoiled the last Harry Potter book (Harry finds a magic bird and he flies the magic bird to a haunted baseball park and he makes out with a baseball). Soon you begin to realize not everything is what it seems, and most everything is in fact the opposite of what it seems, except for the people shooting you a lot and making you die. That is, in fact, exactly how it seems, and should be generally avoided if possible.