At a Glance: Welcome to the annual Something Awful PC game review! Last year we reviewed the god awful Fallout rip off Restricted Area. This year we're taking on the Prey demo. Find out if this alien shooter is worth the wait or if it should be cancelled again! Because god forbid you download the demo and decide for yourself. I don't know why I have to sit here on my ass and decide for you. 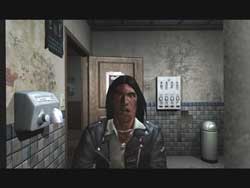 It sure beats playing as another damn space marine. Overview: To fully understand Prey we must take a look at the engine it's built on. Prey runs on the Doom 3 engine. It is common knowledge, though many of you won't admit it, that id Software hasn't made a good game since Quake 2. Sure, we all bought Quake 3 because, hey, we still owe them for Doom. But shooting rockets at each other's feet over and over again is as much fun as swimming in an above ground pool, let's be honest here. That arena shit gets old fast and Unreal Tournament did it better anyway.

John Carmack is the smartest guy on the planet and will someday be the first civilian to build a rocket and blast himself off into space. He builds great game engines. The thing they actually release for sale is the tech demo. It takes another company to come along and make a good game with those engines.

The Quake engine begat Half-Life. The Quake 2 engine paved the way for, uhm, never mind... The Quake 3 engine gave birth to Call of Duty. And now the Doom 3 engine has spawned Prey.

I've been waiting for this game for nine years. I first saw it in a PC Gamer in 1996 and the talk of portal technology made my little 13-year-old pecker rock hard. Unfortunately, technical problems put the brakes on development and my boner went flaccid.

As it turns out, getting cancelled was the best thing for Prey. These days, games have graphics that actually look like the things they are supposed to look like. Can you imagine what would have happened if this game came out when it was supposed to? It would have been a disaster bigger than Sin if you could believe that. Just what in the hell is this? Everybody complains about overused bloom and HDR effects today but do you really think that's worse than badly done colored lighting? Give me a break!

Well, good news, Prey is back and so is my raging erection! Read on to find out what I thought about the demo because my opinion is just so important to you.

Story: The demo begins with an impressive display of positive comments about the game from gaming publications such as Gamespot and Game Informer. I know I'm convinced! Getting a magazine or web site to say nice things about your game is as easy as making a game and planning to release it sometime in the future. It's not uncommon to see a magazine talk about the next Star Wars game that's "going to revolutionize the franchise" and then four months later when the review comes out it's "Surprise surprise, another shitty Star Wars game!"

Prey tells the story of a disgruntled Native American named Tommy who becomes abducted by an advanced race of alien creatures. Contrary to popular belief not all Native American peoples are rolling in that sweet, sweet Indian casino cash. On a recent episode of Penn & Teller's Bullshit the fat one revealed that the annual 18.5 billion dollar take from Indian gaming is only going to a small percentage of Native American tribes, and the one who doesn't talk made funny faces at the camera while wearing an Indian chief hat. This sorry state of affairs causes Tommy to beat up strangers with a wrench and whine about his terrible life to his grandfather and girlfriend (played by Nelly Furtado). 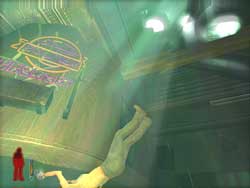 This is how they pick up on bar chicks in space. Before we can get another dose of Tommy's exciting personality the entire bar is engulfed by an alien space ship, the pilot of which saw a really wicked pickup truck and just had to have it. Soon everyone in the bar is riding on an alien roller coaster ride.

While everyone here at Something Awful is cynical and we're supposed to hate everything I must say that I was really impressed by the introduction to the space ship. The guys at Humanhead really outdid themselves this time by creating an exciting and believable alien world. Though anything short of shitting in a CD sleeve and sticking it in a box would have outdone Dead Man's Hand.

I could have done without the chick though. I mean, how dumb could she be? "Tommy, what are those things?!" How in the hell is he supposed to know? "Tommy, those things, did they call ahead? Do they happen to know you?! Do you owe them money?" And her incessant praying. Tommy, the mechanic hero, is trying to think here! Man, remind me to never get abducted by aliens with a woman.

Luckily a mysterious stranger comes along and throws a wrench in the aliens' plans by blowing up the track. Down falls Tommy into the half-solid, half-colon spaceship. I'm not kidding folks, this is one advanced alien species. Aliens scientists have once and for all harnessed the power of the sphincter. More on that in the gameplay section.

Though unusually long for a demo it ends all too soon and we are left to wonder what will become of Tommy and his chatty elfen she-male girlfriend. Will she be grinded into a tasty alien stew? Will Tommy ever tell Jen he loves her? Or will they Halo 2 us out of a proper ending and set it up for a sequel set for release in 2015?