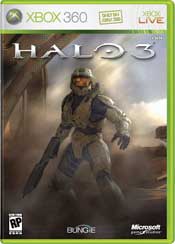 Of course, no Halo 3 experience is complete without an Xbox Live subscription paid seven years in advance and some Mountain Dew Game Fuel! Only the most hardcore gamers drink Game Fuel and Slurpees to finish the fight and then head over to Burger King to finish your burger grilled to perfection just the way you want it!

That's what I would have said had Microsoft dumped a boatload of free crap on my doorstep, which is just a Garfield doormat with the lettering worn away except for half of the word "lasagna". There's also a fake rock that can store an extra key inside but I haven't gotten around to making a backup key to the backup key I had to use when I lost my keys while going out and buying the game in the first place (yes, this will factor into my review).

Since nobody showered me with riches or a free review copy I'm left with the task of forming my own opinion about a game, a fate worse than death or eating anything from Burger King. I don't really have anything against 7-11 though.

Every review I've read has started by talking about the hype surrounding this much-anticipated title. Because I'm just as uncreative as them, I'll be doing the same. The hype surrounding Halo 3 has been impossible to ignore even if you've been living under a rock, with Osama bin Laden, and he was always hogging the television. Even if you cut out your eyes, well, the Braille Institute is currently sponsored by, you guessed it, Halo 3. 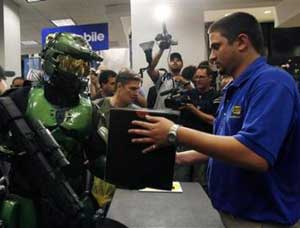 Video games are more mainstream than ever.Like Sony did with the PlayStation, Halo 3 is helping to make video games more mainstream which means a two minute story on The Today Show about this hot new game coming out while showing footage of a bunch of faggots waiting in line for it. Thanks. Now even the lowest form of life on Earth, bored housewives, think we're nerds. If you really want to see video games hit the mainstream, kill all people who currently play video games.

The general consensus is that Halo 3's single player feels more like an episodic installment than a full, robust campaign. There isn't much to it and what's there isn't particularly exciting. Of course, the most common defense to those claims is that the multiplayer is so refined that it more than makes up for the sloppy solo campaign. Besides, multiplayer-only games that don't even afford players the opportunity to shoot at the same stupid aliens in the same corridors with the same reflective shader for roughly six hours aren't punished for it, so why is Halo 3?

If you went to two steakhouses that made similar quality steaks but one included a baked potato free of charge but the baked potato was short, didn't offer anything particularly new over other, more competent potatoes, and had an unsatisfying ending, you would probably prefer the other steakhouse.

But wait, the other steakhouse is themed after the Irish famine and doesn't even have potatoes. So? If you're going to offer potatoes to video game diners in your stupid analogy, it might as well be a good potato or none at all. You still have to look at the potato, which makes you depressed when you think of what that potato could have been like had they had actually put the effort into it and tweaked the A.I. a little bit.