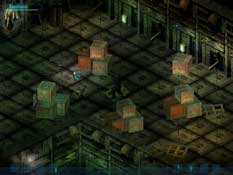 Boxes! I've seen these before!

I love cyberpunk and the whole post-apocalyptic scene. I dig ChemLab, love "Blade Runner," and played Wasteland until my Apple IIC overheated and charred the drapes. There's just something inherently intoxicating inside hulking neon cities backlit by the rainy, filthy haze spewed from over congested streets and countless flame-belching power plants. When I first discovered a post-Fallout series game entitled "Restricted Area," one which took on the cyberpunk / apocalyptic environment I love so much, I grew a bit wary.

"Surely this game cannot be any good; it was released last year and I've never even heard of it!" After Googling up some reviews, I was shocked to discover it received multiple 82% ratings from gaming magazines across the globe, in addition to praise from multiple RPG sites. How could this happen? An above-average futuristic RPG that somehow slipped under my radar? Assuming the game's lack of publicity was due to its German roots, I immediately ordered the game and impatiently waited a week for it to be delivered. I popped the CD into my computer and installed the game the moment it arrived, preparing myself for the deep, addictive gameplay the reviews promised me.

If you're reading this review, I'm sure you can imagine how it all turned out.

Restricted Area tells the tale of four two-dimensional one-dimensional people fighting for... well, something, in a bleak dysopian future. If you're desperately avoiding reading any possible Restricted Area spoilers, you should probably stop reading right here, and go back to whatever you were previously doing, such as waiting for the surgeon to finally transplant a fully functioning brain into your head. Then again, if you're the kind of person looking for Restricted Area spoilers, pretty much anything you read will shock and amaze you, from the sides of public buses to instruction manuals on hair driers. Here's a spoiler for you people: it turns out the main ingredient in a can of peas is "peas!" PLEASE DON'T TELL THE LEVEL 54 PEOPLE CAMPING OUT IN THE SODA AISLE! 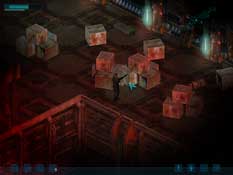 OH MY GOD THIS IS SO AWESOME, MORE BOXES!!!

There's really not much of a plot in Restricted Area, which makes perfect sense because there's really not much of anything in Restricted Area. For example, there's only one location in the game, the city you begin and end inside. This "city" isn't even a city; it's one street with buildings you cannot enter, inhabited by people who stand motionless and spew the same lines of dialogue every time you encounter them. These infinitely fascinating and colorful characters each have their own well-researched and complex personalities which truly help the game progress at a lightning-fast speed, much like a diseased rodent carcass which somehow crawled into a grade school cafeteria vat of macaroni and cheese.

For example, the character named "Doc" is a doctor! Then there's a character who has a gun; she sells you guns! And how could I ever forget the memorable scamp known as whatever his name was, the guy who wore a business suit and paid you money to kill things? We had good times together, and my fond memories of him will never die, no matter how much alcohol I funnel down my throat in an attempt to make the last week vanish like my college days.

To make up for the lack of characters, plot, coherent story, dialogue, or anything else which could possibly be viewed as something positively contributing to the game, the instruction manual has about 30 pages dedicated to some long, convoluted back story of various giant, faceless corporations of the future, as well as a detailed time line containing a bunch of things that might possibly be interesting if, oh let's see here, they were included in the game in even some remote form. I have absolutely no idea why somebody sat down and wrote this crap because it doesn't have anything to do with the game and you don't need to know it at all, nor does it help push the plot in any direction since the story is basically a giant 40-ton boulder sitting in the living room of an elderly couple who lost their vision and hearing decades ago.

You can choose from four pre-rendered characters. It doesn't really matter who you pick, because the game will still end up being a pile of shit regardless. After playing through three characters, I held the hope that upon choosing the fourth and final character, a completely different game would load, one which didn't make me want to throw my computer into the ocean. I guess all the good German scientists left the country after World War II, because no such thing happened. Oh, but hey, they did introduce an incredible cast of main characters to choose from! Too bad they had to leave them out of the game, and instead include the following boring idiots.