After getting up from the floor, I remembered that Hair Pro v5.05 had a nifty "editing" function, something I hoped would complete my total makeover. I mean, a new hairstyle is really keen and everything, but what about the makeup? I wanted to feel pretty all over! Unfortunately, the editor in Hair Pro v5.05 leaves something to be desired. 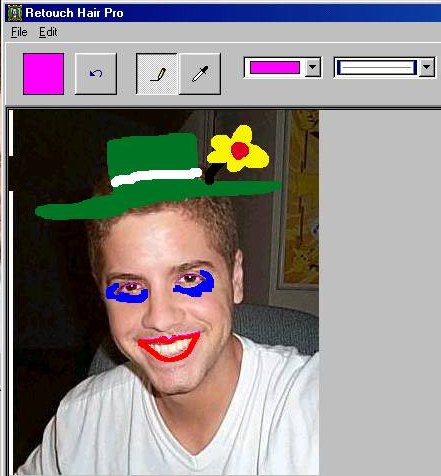 As you can see, the "Retouch Hair Pro" window isn't exactly the powerhouse of image editing software. You can only choose from 16 different colors, none of which look natural smeared on a person's face. Look at that picture and tell me the flower coming out of my festive hat looks realistic! You can't do it!

I was really bummed out at this point. It had become obvious that I wouldn't ever get that total makeover I had really wanted from Hair Pro v5.05. I was almost as depressed as the time I realized that the guy in the Santa suit was really some person my dad had hired to act like Santa... and have sex with my mother.

Then, like a bolt of lightning being shot from wherever the hell bolts of lightning are shot from, I had an idea: why not try to makeover somebody else? Somebody with no hair? Perhaps my bad luck with Hair Pro v5.05 was due to me having actual hair in the first place. Luckily, thanks to the lax stalking laws in my state, I had plenty of photos displaying a popular gaming celebrity who lacks hair: Jason Hall. Yes, Jason Hall, creator of the famous Lithtech line of games. Jason Hall, the man who's body fat is measured in increments beginning with "nano". Time to put Hair Pro v5.05 to the test.