After the slew of alien invasions last week, you'll be happy to know that we have another one to cover today: Paul, the latest from British comedy duo Simon Pegg and Nick Frost. To follow that, we have science-fiction intrigue with Limitless, which scavenges all the elements of Philip K. Dick that The Adjustment Bureau threw away. Finally, The Lincoln Lawyer brings Matthew McConaughey back to the courtroom, where he's always done his best work.

EXPECTATIONS: It's nice that America has embraced Simon Pegg as the current British comedy actor du jour. However, we all remember what happened to Ricky Gervais when he became a Hollywood darling and gave us the rather terrible The Invention of Lying. So now Pegg and his long-term partner (in comedy, not life partner) Nick Frost have brought us Paul, a high-concept film about American government secrets and the truth behind alien invasions. This could go either way.

REALITY: For everything in Paul that works well, there is something lurking nearby to drag it back down to Earth. It can be endearing, funny, disappointing and repetitive, all at the same time. There are plenty of laughs to be had, but too many of the characters bleed into each other, and too much of the humour relies on callbacks and bizarre swearing. 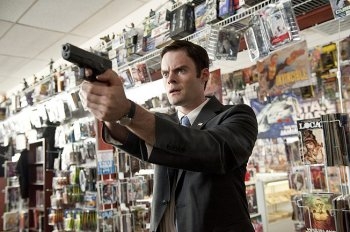 I don't know who this guy is, but he's good.Best friends and massive nerds Graeme Willy (Simon Pegg) and Clive Gollings (Nick Frost) have taken a pilgrimage to America to take part in the San Diego Comic-Con. After having a whale of a time amongst their fellow nerds, they take a road trip, touring the alleged alien invasion sites of the States. They soon find that their ways don't fit in quite as well in the world of homophobic rednecks, trigger-happy police officers and sycophantic evangelists.

That all changes when a chance encounter unites them with Paul (Seth Rogen), an extra-terrestrial on the run from a shady government agency led by The Big Guy (Sigourney Weaver). The newly formed trio starts an adventure across America that owes as much to The Blues Brothers as it does to classic sci-fi. That said, it lacks the absurd charm of The Blues Brothers, in spite of Pegg and Frost's repeated attempts to evoke John Landis at his best.

The main problem I have with Paul is the character of Ruth Buggs (Kristen Wiig), who is established as an evangelical Christian who is suddenly converted to atheism after the discovery of Paul. It seems a little hypocritical of Pegg to throw his atheism in the face of straw man evangelist characters. You can't invent proof and try to rub it in people's collective faces; even The Invention of Lying spread its atheist agenda better than this. I'm not a religious man by any stretch of the imagination, but I find this kind of forced ideology-pushing to be just as obnoxious and delusional as the confused idiots who stand on street corners shouting into a megaphone about how McDonald's is the devil and then go home to the comfort of knowing they saved a million souls.

This sub-plot basically leads to the character deciding she can swear as much as she wants. That's not necessarily a bad thing, but in the wake of films like In The Loop and Four Lions, the relentless attempts at funny swearing in this film (constant iterations of titty-fucking, titty-farting and other crude variations thereof) feel forced and poorly executed. When Jason Bateman finally shouts "Mother-fucking, titty-sucking, two-balled bitch!" I had seriously had my fill of cleverly hyphenated swearwords. 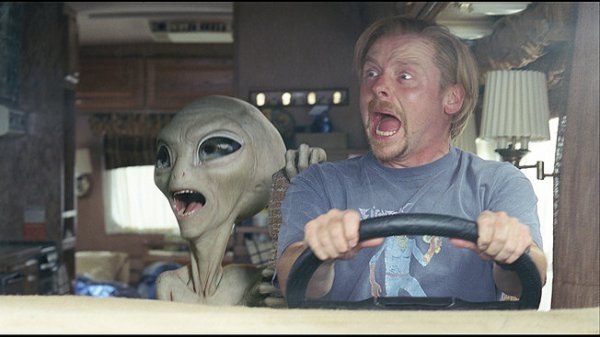 AAAAAGH! Something off-screen just to the left!

And that brings me to my next issue: Who the hell is Jason Bateman? In Paul he plays Agent Zoil, a mysterious government type sent by The Big Guy to track down the wayward alien, but with ulterior motives of his own. He could have been such an interesting character, like Lee Van Cleef in For a Few Dollars More, but Bateman chooses to play him with a heaping helping of absolutely nothing interesting. Previously, Bateman has eluded me, as I'm sure he has most non-American audiences. Speaking of actors I've never heard of, the absolute stand-out in Paul's supporting cast is Bill Hader. Who the hell is Bill Hader? I have honestly never heard of him before, but he steals every scene he's in here as the wide-eyed, eager-to-please Agent Haggard, and I do hope to see more of him. 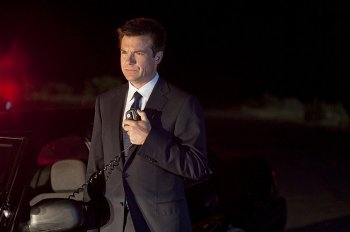 I don't know who this guy is, but he's terrible.This is the part where I get a ton of e-mails from Americans telling why Jason Bateman and Bill Hader are famous, and I can assure you I have since found out. I think the casting of actors who are well-known to Americans and relatively new to British audiences is completely intentional, given the nature of the story. They're casting British characters who are lost in American culture and under threat, so giving us American TV stars who would otherwise be unknown to domestic audiences is very clever. It establishes an inherent, inescapable American-ness that helps build the world of guns and rednecks as genuinely threatening to xenophobic tendencies.

That is, until Paul himself is introduced. Paul is very impressively realised character. All of the sincerity that I have come to admire in Seth Rogen absolutely shines through in the (presumably motion-captured) performance of Paul. His trademark facial nuances are perfectly captured, even though the character itself is designed to deliberately evoke the publicly recognisable "grey alien" image. Of course, this is deliberate as they explain he has been advising the government and individuals from the entertainment industry on how to gradually introduce the human race to his visage. This isn't subtle, but it's one of the best ideas in the film, and it helps to make the title character the most immediately relatable and likable presence of the entire cast.

There is certainly enough to like here, but there was a point late on in Paul where I was hit by the realisation that I hadn't laughed in a while. Over-reliance on running gags turned the latter part of the second act into a series of pay-offs that didn't really work. The rest of the film certainly has charm, and it picks up the laughs before the end, but without their Shaun of the Dead/Hot Fuzz director Edgar Wright at the helm, Pegg and Frost seem a bit lost in space.

MINORITY REPORT: I met an alien once. I asked him to take me with him away from this horrible wasteland. He just spat alien spit in my face,called me a dirty hobo and flew away. I've come to understand that all aliens are assholes. - Donovan Laird, "The Wasteland Chronicle"