This is the right side of the menu bar, full of the "buttons that work right but probably shouldn't." I'm not quite sure what that random blob of black stuff is on the bottom left, as it would just randomly appear throughout my hair styling session. I think it was God's way of telling me that it's not natural for men to be using this program. You'll also notice that there are a bunch of icons portraying various hairstyles on a drugged out, cloned woman. Pressing those buttons will result in a box popping up displaying the corresponding hair style. The hepcat on the right is a male and contains the only two hairstyles for men, both of which look like they were taken from a 1970's Wal-Mart advertisement brochure. In Brazil, women have countless hairstyles, but men apparently only have two: "flat" and "messy". This is why Brazil isn't known as the male supermodel capital of the world. Well, that and the smog.

After I had familiarized myself with the intuitive menu bar, I decided to get busy working on my virtual makeover. I loaded up my photo and tossed on the first hairdo. 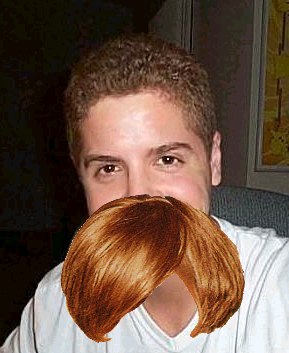 As you can tell, my first attempt wasn't overly successful. Due to my inexperience and poor coordination, the hair isn't even on the correct part of my head. Heck, it isn't even a male's hairdo! Since I have now logged over 50 minutes on this program and consider myself a "Hair Pro v5.05 Expert", I can look back and laugh at this rookie mistake. I'll admit that this program was initially very frustrating, but I didn't give up. Soon I found the men's hairstyles, figured out where they should go, and was ready to try again. I was pleasantly surprised by the results. 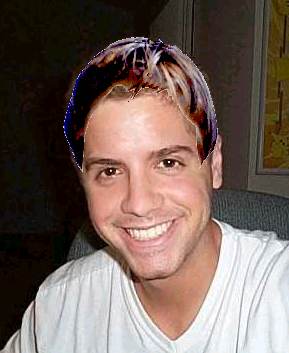 According to Hair Pro v5.05, this is the "short brown" style of men's hair. I am not sure why it appears to have magical blue and purple highlights, but I never claimed to be an expert on fashion. All I know is that I look good. DAMN good. My virtual makeover was paying off already, and I could feel my animal magnetism exponentially rising. Just look at that picture! I could be the next Rutger Hauer!

However, I wasn't content to stop there. No, I wanted to examine how I'd look in ALL the hairstyles. I didn't want to be limited by a superficial and meaningless label like "male". I desired to expand my horizons and see myself in hairstyles from both the sexes. I am truly an open-minded individual.