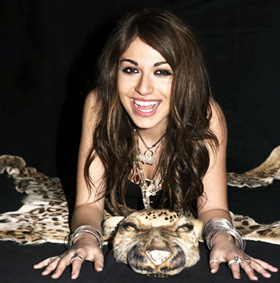 In the Australian outback, Gabriella Cilmi slaughtered wild animals to survive.Gabriella Cilmi: Aussies usually like to do things their own way ("hard, spectacular, unique" Australian Rules football; not knives but KNIVES), but Melbourne native Gabriella Cilmi's "Sweet About Me" seems like a pretty standard "You Know I'm No Good" rip. Now based in London, Cilmi doesn't make a convincing femme fatale, perhaps because she spends the rest of the album either wringing her hands about "why so many people are hurting" or playing a disco diva. She adapts Amy's brazen vocal sass, but she seems like she'd rather be aping some flighty twit, like Nelly Furtado, or maybe Joss Stone, Winehouse's less talented, much healthier predecessor in the "frequently barefoot British woman who's often wrongly assumed to be black" category.

"Sweet About Me" appears in a Danish deodorant commercial (quoth the YouTube commenter: "Bohr die titten"), solidifying a connection with the kind of personal hygiene products that Winehouse long ago abandoned. However, she has more in common with Winehouse than the other Amy clones. Cilmi confesses some mild vices ("I am addicted to caffeine") on her MySpace page, and muses "I want to marry a cowboy and live in the desert," which might be the Aussie equivalent of Winehouse's apparent ambition to marry a convict and go to Disneyland. Also, Cilmi's surname is pronounced "chill-me," but if erroneously intoned as "kill me," it approximates the distress signal Winehouse broadcasts constantly from the radio tower atop her skull. 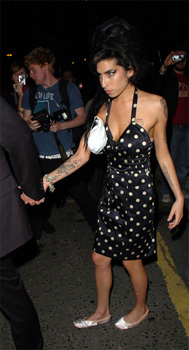 Amy Winehouse is watching all her imitators -- with her EVIL EYE.