Occasionally, readers say something like "it's easy for you to take shots at these bands from your mother's basement." They're wrong, of course, not only because I write from a crude office in what used to be my mother's ground-floor exercise room, but also because it's much easier to make fun of musicians to their faces. You don't even have to listen to their records that way! But I'm feeling charitable due to the holidays and all, so I've decided to launch the Q & SA feature with Devin Townsend, a performer various Something Awful forums members actually like.

Townsend has dabbled in every rock-based genre that's worth a shit, from metal to prog to -- well, those are the only good rock-based genres, but he does electronic stuff too. His latest release Addicted should appeal to you if you enjoy upbeat songs with the Dutch hard-rock equivalent of disco-diva vocals, and really, why the fuck wouldn't you? 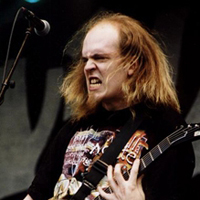 SA: At a Strapping Young Lad performance I attended, you greeted the crowd with "Silence, inbreds!" Has anyone has ever contacted you, in person or online, to say that they were offended or saddened by your insulting banter?

DT: Fuck yeah! I remember the first time I said that line. I was doing a solo show in Colorado Springs, and some woman came up to me just repeating "how dare you?" over and over. Her husband came to pull her away, and she was like "no no, hang on..." then she walked right up to my face and said "how dare you" three or four more times. I couldn't really think of an answer, so that's what I told her.

I've gotten a ton of shit for that sort of thing, but I came up with that performance style because I was bored and trying to entertain myself. I think what I am planning to do now with the new tours is to present a more satisfied and honest version of what I do. I'm happy to have the opportunity to play for people, so I'm thinking the new incarnation will be equally as intense, but less steeped in abuse.

SA: What advice would you give a singer looking to develop more of an entertaining stage presence?

DT: Let it out, I guess. I think an audience responds to honesty and knows if you're full of shit. A fake 'tough guy' is usually pretty easy to spot, and so is a naturally funny guy who isn't being too funny. I think the stage gives us an opportunity to exaggerate our inner performer. I know that there's a version of me that comes out on the stage, abusive or not, that is entertaining. But I think ultimately, some people are predisposed to be entertaining people, and some can't be bothered. If you can't be bothered, don't. I find it awkward to watch conservative, normal folks with strange haircuts being 'crazy' on stage. It's embarrassing. However, if you act out your fantasies that are legitimate, then you've got something people can relate to.

SA: What are some nightmares you've had recently?

DT: My most recent nightmares include me acting out on primal and vicious fantasies. Ultimately, that's just me sorting out things within myself that need addressing. We are our own worst enemies, and to not confront those elements of our nature is as unhealthy as acting on them. I had a dream that I met the devil, and he was me, and ultimately, I related to him in a very intimate way emotionally. For years I've denied any anger or fear in myself, and now to face it makes it easier to overcome. These nightmares can be viewed as cathartic in many ways. 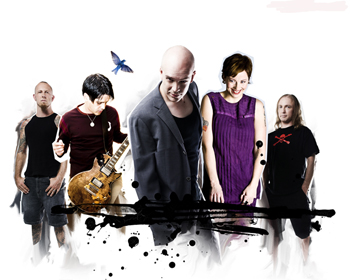 SA: With the instantaneous nature of web forums (speaking in particular about your own), do you feel any undue pressure resulting from reading your rabid fans' opinions? Do they sometimes get on your nerves? Have you ever changed or compromised any of your material in order to appease fans?

DT: Yeah, of course there are things that get on my nerves, but I rarely comment on those things. A forum is a public place for people to express opinions, good or bad, founded or unfounded, on what I do. It's all perspective, and I welcome any and all comments. I think that if someone comes to the forum day in, week out to vocalize how much they dislike something, at least the music has generated enough of a reaction for them to spend that amount of time. But again, there's no 'right' or 'wrong' opinion. People need different things from music and there's an ass for every chair (so to speak). It's all subjective and I'm actualizing a work in progress. I am honest with everything I do, and I do it to the best of my ability.

SA: If a cool MTV producer with slick shades approached you and asked you to sign a paper that will allow your music to be used on their highly popular music series Rock Band, would you tell him to shove off or would you whip out an equally slick pair of shades and sign his paper with a overly elaborate feather pen?

DT: I typically hate feather pens, but that aside, I would license my music to situations that don't offend me. If a car dealer wanted to use a song to promote a cool car and gave me a shitload of money to do it, hell yeah! Then the next tour I'd have a full choir and flying elephants with the proceeds. However, if a tobacco or alcohol manufacturer wanted to use it, I'd have to say no. It's all subjective again.