In the wake of Iron Man 3 and Star Trek Into Darkness, the real gem of the summer blockbuster season appears in the form of Fast & Furious 6, a worthy follow-up to Ian "Professor Clumsy" Maddison's beloved Fast Five. We also have Peeples, which drives Martin R. "Vargo" Schneider to drink, and The Sapphires, which Joseph "Jay Dub" Wade finds hard to resist.

EXPECTATIONS: The Fast & Furious franchise is all over the place in terms of its general quality, from the not-bad remake of Point Break that started it all to the ludicrously great Fast Five. If Fast & Furious 6 is anywhere near as awesome as Fast Five, then we're all set for a damned entertaining film. They've been showing those extended clips of the tank scene in front of every film for the past month, so at the very least I know there's a scene in which the heroes chase a tank along an endless road. Things are looking good.

REALITY: While not quite as tightly paced or lovingly outrageous as Fast Five, Fast & Furious 6 is better in other ways. What we have here is an enjoyable action extravaganza with some very impressive set pieces and some of the best precision driving I've seen outside of motorsports. At its core, though, Fast and Furious 6 is a story about two feuding families, one with the advantage of unity and the other without, and it even manages to raise some interesting questions about the place of the family unit in the modern world. That it does all this in the midst of being hilariously bonkers is what makes it unmissable.

Just everyday stuff for these guys.


After the events of Fast Five, Dom Toretto (Vin Diesel), Brian O'Conner (Paul Walker), Mia Toretto (Jordana Brewster) and the rest of the team (Tyrese Gibson, Chris "Ludacris" Bridges, Gal Gadot and Sung Kang) are living it up with their immense wealth stolen from a bank vault that they dragged through the streets of Rio. This gets turned upside down, however, when Detective Hobbs (Dwayne Johnson) and his new partner Riley (Gina Carano) discover that Dom's old lover Letty (Michelle Rodriguez) is not dead, as had been assumed, but instead is alive and well and working with British super-criminal Owen Shaw (Luke Evans). Now the Fast and Furious troupe comes out of retirement for one last job, but this time it's personal!

Stop complaining; action-movie plots have always been built on cliches. It's refreshing, then, that Fast & Furious 6 takes a few steps back in time and uses old cliches instead of new ones. You'll be pleased to know that the focus of the film is not the villain's master plan that includes the improbable phase of being caught and locked up in a specific room so he can get one up on the good guys. No, instead his plan is mostly glossed over. He's stealing some kind of military blackout device from someone so he can sell it to someone else for what we can only assume is an enormous amount of money. It's all incidental, really, because as Tyrese Gibson's Roman points out in a particularly good scene, the villains are merely the "evil twins" of their own anti-heroic band. That is carried right through to a third-act twist that makes little plot sense, but perfect thematic sense. 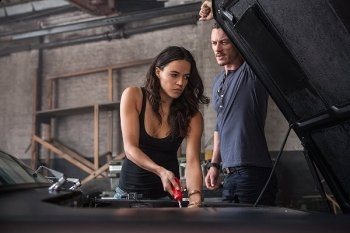 Don't you just hate people standing over your shoulder while you're trying to work?The whole film is like that, throwing common sense out of the window in order to make its point. And why not? Embracing nonsense is fun. People who are preoccupied with realism will end up tearing their hair out during this film. There are armoured trucks keeping up with racing cars, impossibly long runways and a lot of confusion over just which country we're supposed to be in at any given moment. Most of the film takes place in London, but the aforementioned tank chase takes place on an endless road in the desert? Don't question it, it doesn't matter. What matters is that they chase a tank and everyone gets something to do.

The chase scenes are incredibly well put together. Early on, Shaw makes a getaway in what O'Conner describes as "The kind of car you'd see at Le Mans," and the skill of the stunt-driving team is breathtaking. The level of danger to both the main characters and members of the general public is constantly apparent as these things barrel around the streets of London causing mayhem and destruction. Now, speaking as a motorsports fan, I really get a kick out of seeing this kind of thing being implemented with real cars in real environments, especially in a time when CGI can do a lot of the heavy lifting for you. The logistics of choreographing and shooting car chases has always been one of those things that simply boggles my mind, and the scale of the chases in this film is unfathomable. Even when the geography becomes impossible and silly, everything is extremely easy to follow and exhilaratingly executed.

Director Justin Lin clearly has a lot of affinity for these characters and their team dynamic, which is why he never leaves any of them idle for long. Unlike Star Trek Into Darkness, characters aren't pushed into the background or reduced to worried housewives for the sake of emphasising the focus on the leads. Here everyone gets into the action equally. The romantic relationship between Gal Gadot and Sung Kang is depicted in perfect action-movie style, with the two characters operating constantly as a unit. They move around each other in perfectly choreographed ways like real people would never do, but that doesn't matter, because they're cartoon characters. The whole group is like a Saturday-morning cartoon squad; it's basically The Expendables for 13-18-year-olds. Why is that a good thing? Because Justin Lin respects his target audience. 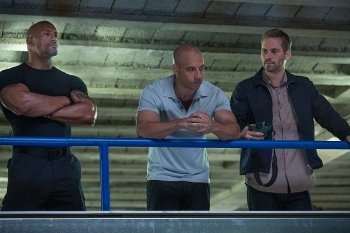 Between the action there's nothing these guys like doing more than leaning on railings. That's how real men unwind.There's a lot of emphasis placed on the idea of Dom being the head of this roaming household and Shaw being the head of the opposing, dysfunctional family. Every family member has his or her opposite number, with "the man" at the top. Shaw's family members are all repeatedly shown to be individually stronger, while Dom's teammates are stronger as a unit. In spite of all their accrued wealth and fine living, the team members all share the desire to remain together no matter where they are, and I think that can be a strong message for young people today who can barely even dream of homeownership in their futures anymore.

MINORITY REPORT: "Somewhere in the world, someone is complaining that the vehicular warfare depicted in this movie between five nitrous-enhanced muscle cars with attached firearms and a stolen military-grade tank down a busy highway filled with civilians and suspiciously few police isn't realistic enough. This person is an idiot. Don't be this person." - A Public Service Announcement from People Who Understand How Movies Work