Everett True writes about music he likes at this site, so go there for a good palette cleanser after this column. 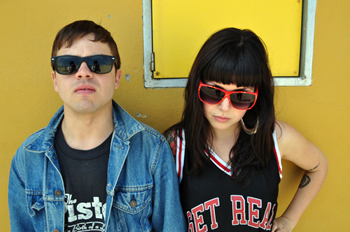 I'll level with you.

Until my editor at Something Awful, Andrew 'Garbage Bag' Miller, suggested that I take a listen to Brooklyn duo Sleigh Bells for my second Defending The Indefensible column, I'd never heard of them. You think the rest of the world cares for what happens inside a couple of hipsters' clubs in Brooklyn and in the minds of a handful of desperate, wannabe-agenda-setting critics at CMJ and Pitchfork? Get a grip.

A cursory shout-out on Facebook deepened my suspicions. "The new Bravery," quoth one Web site editor cattily -- a comparison that doubtless would have cut even deeper with me if I'd bothered to listen much to the old Bravery. I take it from other friends' responses, though, that it was intended as an insult, that folk still haven't forgiven The Bravery's past in mock-ska band Skabba The Hut and powerpop outfit The Pasties, that to be compared with The Bravery's derivative post-punk revivalism is akin to being tarred with the same brush as other flash-in-the-pan outfits such as Interpol and Vampire Weekend. Ouch, harsh!

So I took a listen. Sleigh Bells have worked out that if you turn up your amplifiers past a certain volume, the music distorts. Wow. Now that is inventive. I'd never have thought that one out for myself, nor would Fuck Buttons, Times New Viking, Crocodiles, etc, etc. ... either.

Another friend pointed out the debt that "Tell 'Em" owes to '70s hard-rock outfit Thin "The Boys Are Back In Town" Lizzy. (Presumably, the debt that the single's bombastic beats and cheerleader-style vocals owe to would-be mentor and inspiration M.I.A. is way too obvious to even mention.) Now, I love me a piece of electro-cl$sh and some floor-shaking beats like any closet homosexual ... I mean, Peaches fan ... and I do appreciate that the glam stomp is obligatory for anyone seeking to tap into the FLASHING LIGHTS FUCKING APPALLING DIN market that Sleigh Bells and all their champions are so clearly looking to dominate, but ... um ... how about adding something to the equation? Isn't this all rather four, or 10, years too late? Or is that simply the way the music industry works these days -- it's not just me who feels a cold shiver run down his spine when he reads the word "breakout band" in conjunction with CMJ and Pitchfork, is it? Doesn't music count for anything, or is commerce and the ability to shed several layers of (presumably tight-fitting) spandex clothing on stage all that matters?

Even photos can't stop moving when it comes to Sleigh Bells.

And while we're here, if I want to choose music to work out to, then I'll shove on Lady Gaga or Olivia Newton-John's "Physical" like everyone else, thank you, not music that aspires to be Chicks On Speed minus the natty line in Raincoats cover versions. I go to music shows to enjoy music and maybe have a spasmodic dance or three, not to be made to feel like I'm at a particularly strenuous Sarah Palin rally. (This is a point that, to its credit, Village Voice has already picked up on, interviewing an actual physical fitness instructor about the abs-pumping potential of Sleigh Bells' music.) I didn't like it when Red Hot Chilli Peppers turned music into a physical exercise, and I don't like it now.

And then there's singer Alexis Krauss' tendency to lapse into a lisping, Americanised version of Miki Berenyi over slowly fermenting electro-pop beats when she thinks no one's looking. (When would that be? When she's not stripping off another layer of spandex?) Ms Berenyi, for those of you wondering, was the singer with early-'90s Gothic dream-pop shoegazers Lush. Notwithstanding the fact that shoe-gazing was perhaps the most irritating form of music ever inflicted upon an unwary public by a bunch of over-enthusiastic, zeitgeist-chasing UK music critics -- yes, it was as interesting as the name implies -- some would argue that Ms Berenyi had quite a sweet voice, sugar laced with acerbic attitude. At least it was her own voice.