Ever since the White Stripes heroically saved rock some years back, Jack White has devoted his energy to human cloning, in the form of starting side-projects that sound like the White Stripes. However, while The Dead Weather might be largely indistinguishable from the Stripes in categories such as "vocal mannerisms" and "guitar style," there are important compositional distinctions between the bands. For example, the White Stripes feature a male vocalist and a female drummer, whereas the Dead Weather features a female vocalist and a male drummer (White himself). They're polar opposites, just as different as two gimmicky, blues-corpse-raping groups could be! 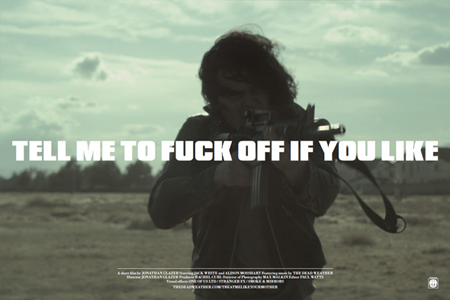 To be fair, the first time I heard The Dead Weather, I didn't think of the White Stripes. Jack White's pasty V for Vendetta visage never even crossed my mind. Instead, I asked "what the fuck is this Limp Bizkit bullshit?" Dead Weather fans compare "Treat Me Like Your Mother" to Rage Against the Machine, but the rapped vocals exude aggressive cockiness, not righteous anger; the riffs are chopped-up funk, not Zeppelin rips; and the lyrics are relationship-dynamics whining, not high-minded political rhetoric. This is definitely another variety of shitty rap/metal.

Singer Alison Mosshart treats the song's title like a creepy come-on, proving White's exploitation of incest fetishists didn't stop with pretending his ex-wife was his sister. With Jonathan Glazer, the man behind a movie in which Nicole Kidman bathes with a kid who claims to be her dead husband, White seemingly hired the right director to bring this vision to life. Instead, Glazer's video starts with White looking like a flaccid-headed Wayne Static on his way to stick up a hair salon, and ends with him brandishing his automatic weapon in rather unconvincing one-handed fashion.

Mosshart and White escape the shootout unscathed, which will disappoint anyone who watched with the sound on and as a result wanted to see the two suffer and die in the video, and perhaps in real life. The series of promo stills from which the above image came adds another level of insufferability, a Grindhouse-style irony veneer.

Mosshart usually fronts the Kills, who are about as listenable as a garage band with a drum machine can be. The Dead Weather also includes guys no one would recognize from Queens of the Stone Age and Raconteurs. Whenever a "supergroup" draws from several decent-in-small-doses bands, people optimistically assume the resulting album will be like a compilation of the two or three tracks that don't suck from each of the main groups' recordings. This is never how it works.

Instead, it's more like multiplying fractions to generate diminishing returns, or inbreeding to produce a retarded spawn. Take 1/2 of the White Stripes and 1/2 of the Kills, and now you have a group that's 1/4 as good as either, especially because White insists on playing drums. Then add anonymous contributors like a guitarist from Queens of the Stone Age (1/4) and a bassist from Raconteurs (1/16, figuring Raconteurs are already 1/4 White Stripes at best). You end up with Horehound, an album that's certainly tedious enough to feel like the result of a math equation.

People also get stupidly excited about side-projects because they assume artists created them as a vehicle for experimental, innovative work that they considerately decided not to release under the band's trusted brand name. In practice, these records usually serve as receptacles for the terrible ideas that other band members were smart enough to reject, or for the embryonic jams they were too lazy to convert into actual songs. For example, Horehound contains "3 Birds," a disjointed instrumental that tosses together sporadically intriguing snippets before it randomly fades, perhaps because it's a leftover stew instead of an arranged composition with a beginning, middle and end.