In less than two weeks, Muse will release The Resistance, one of the most commonly reader-requested targets of 2009. For now, I'll address the closest thing, at least alphabetically: Mute Math. Actually, Mute Math's Armistice climbed much higher on the U.S. charts than any Muse album except Black Holes and Revelations, despite the fact that neither you nor anyone you know owns it. Whenever obscurities achieve sales success, cultish factions (Christians, Twilight fans) and supernatural factors (a lawnmower with a sense of dramatic timing) are at play. 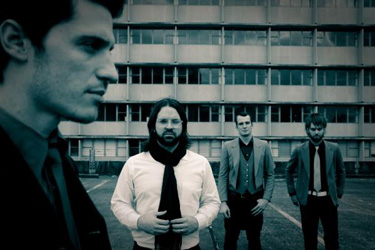 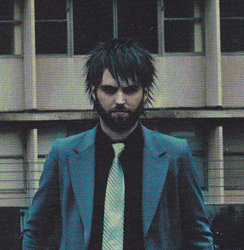 Like relocated sex offenders, former rap/rock participants should be forced to divulge their previous indiscretions. People have the right to know if that polite-seeming singer who's melting their hearts once rhymed "wrecking the mic yo" with "I am a psycho." So, for your protection, I present Earthsuit's "One Time," during which future Mute Math singer Paul Meany angry-raps while wearing a tracksuit that makes him look like Willie Wonka's giant blueberry. Warning: Listening to Earthsuit might make subsequent Mute Math songs sound almost appealing, so intersperse snippets of something that's actually good as a palette-cleanser in order to avoid forming regrettable attachments.

Even people who don't gravitate toward horrible music might have encountered Mute Math in the past couple years, provided that they do gravitate toward horrible movies. Mute Math appeared on the Transformers soundtrack, tranquilizing the once-energetic theme song with earnest vocals and listless atmospheric effects. This track was the only thing related to the film that bored people in the traditional low-key fashion instead of a loud, confrontational manner: It slipped them a sleeping pill rather than pummeling them unconscious with exploding jackhammers.

However, hearing Meany dreamily croon "Autobots wage their battle to destroy the evil forces of the Decepticons" was pretty hilarious. I even considered the possibility that it was self-conscious parody, that Meany recognized the folly of pairing elevator-music electronica with tales of warring robots, until I remembered this guy took Earthsuit seriously.

In other stupid movie news, Mute Math contributed to Twilight. "Spotlight" plays during this scene, which begins with someone blurting "Oh.my.God" like the big-butt spotter from "Baby Got Back." Twilight teens can expect more intensely aghast reactions during the public unveiling of their own Bella-style dalliances with creepy older men.

Some of Mute Math's more devout followers might find its affiliation with Twilight to be scandalous, but the group doesn't mind breaking with Christian tradition. In fact, it sued its label Warner Bros. for directing it toward Christian retailers. As for fans who make their listening decisions using actual music-based criteria, Mute Math appeals primarily to people who enjoy easy-listening smoothness but worry that Seal and Jamiroquai are too black sounding.

Armistice combines wimpy vocals that think they're rocking with electronic wallpaper that believes it's edgy. It's as delusional and lame as solo Sting records, as pathetic as Coldplay dance remixes or lite-jazz Foo Fighters covers. And the tragic part is how tantalizingly close this travesty came to non-existence. From Mute Math's MySpace page:

The members of MUTEMATH had reached their breaking point. Collectively gathered on the front porch of their New Orleans home-studio where they were struggling to record the follow up to their 2006 critically-acclaimed Teleprompt/Warner Bros. debut, the quartet screamed at each other with the full weight of the accumulated frustrations that had escalated from weeks of fighting. To heighten the tension, a lawn mower droning in the background drowned out their voices, inciting them to yell even louder in misguided efforts to be heard.

Finally, drummer Darren King voiced what everyone was thinking, but feared saying out loud: either call it quits or swallow their individual pride and try to write the best songs they ever had. 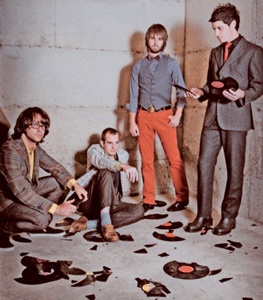 Mute Math had written an album's worth of songs prior to this confrontation, but they scrapped them all when producer Dennis Herring told them "honestly, I don't think it's great." Clearly, the man behind not only a Jars of Clay album but also Modest Mouse's transformation into an adult-contemporary version of the Red Hot Chili Peppers knows greatness when he hears it. The world could have been spared Armistice if Mute Math had taken proper discouragement from Herring's opinion, but instead they started writing new material, with horns and drum solos and symphonic strings. Suddenly, another unremarkable wimp-pop outfit felt emboldened to become "experimental."

Its evident that this record is not a high-minded story with a beautiful resolve, but rather the experience of knowing when to stop fighting for the sake of progress. Without a doubt, ideals get mamed and dismembered in the scuffle, but Armistice emerges as a transcendant anesthetic to keep us singing and dancing through it all.

I guess that's the kind of quality proofreading you get from your promotional team after you've sued your label.