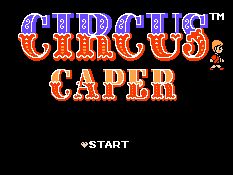 At a Glance: As a person who still regularly plays NES games, I always enjoy getting my hands on a game I enjoyed as a kid and playing through it again. Normally I will remember the first few levels pretty clearly, then the farther I get the less familiar everything will seem, and at some point everything will be completely new because I had the controller skills of an 85-year-old stroke victim as a kid and I could never get past the third or fourth level. You know, as opposed to now when I review roms when I can’t even get past level one. Anyway, playing Circus Caper only brought back vague, fuzzy memories that refused to fully materialize. I assume it’s because playing this game back in the day was a traumatic experience that my brain tried to block from memory, like the time my grandmother accidentally slashed my arm open when I walked by her while she was cutting fish, then she saw a mosquito land on the wound and tried to drown it with a bottle of lemon juice.

Game Plot: There is a masterfully constructed continuity here between the title and the intro, because the intro does in fact show a caper that occurs within a circus. A boy and his sister are walking around a circus with their parents, while music that sounds suspiciously similar to the song from the Smurfs plays in the background, and the sister suddenly sees one particular tent that she really wants to go into for some reason. Her dad says they’re out of money however, so she sadly leaves and that is the end of the story. 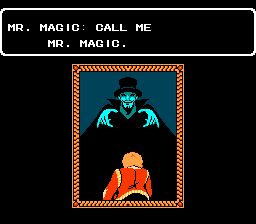 SURPRISE, that isn’t really the end! As they’re leaving, they see a clown (a pretty creepy one, even by clown standards) who says “Hey kids, come here and roll these!” I guess since Mario 2 introduced Birdo, the NES’s first transvestite character, the developers of Circus Caper decided to break new ground by introducing the Nintendo’s first child molesting carnival worker. He points at two dice on a table (at least he points downwards; I hope he was pointing at the dice) and lets the lucky kids roll them. And no matter what comes up, he proudly proclaims that the kids win a single free ticket to whatever show is in the tent behind him. But fortunately the brother lets the sister go in and apparently doesn’t mind sitting outside for a few hours until the show finishes up.

Fast forward to the end of the show – it’s nighttime, nobody is coming out of the tent, and I guess the parents just disappeared or got killed in a blimp accident or something because they are nowhere to be seen. A giant floating guy in a top hat comes out of the tent and helpfully informs the boy that “I’ve got your sister.” The boy replies with “Shucks! You can’t have her!” And runs into the tent, only to trip and fall into the shittiest side-scroller I’ve seen since Hook. 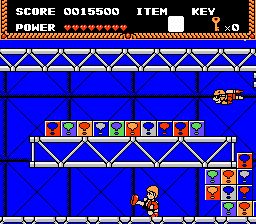 The kick is not an especially lethal weapon.

Enemies: It’s a circus-themed game, so of course you’re going to have enemies that look like clowns, trapeze artists and fat bucktoothed carnies who smell like an entire family of dead skunks and yell obscenities at you if you decide not to pay $5 for the chance to try to throw a basketball through a hole the size of a quarter in order to win a cheap counterfeit Garfield doll. There are also flying clowns with jetpacks in a couple parts, and for those parts you have a jetpack too. But it doesn’t let you fly, it just lets you jump more than once through the air if you hammer the A button quickly enough.

Weapons: You start out with the ability to punch and do a really stupid-looking kangaroo kick. You can also pick up a wide variety of completely useless weapons, such as the slow-ass soccer ball, slow-ass hammer and slow-ass shield of little black things around you. There’s also an attack that makes a block appear, and it moves only slightly slower than all the other weapons because it stays in one place. 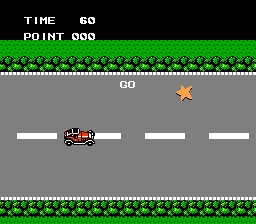 Wait, wasn't I playing a completely different game a minute ago?

Number of Levels: The main game has six levels. However, approximately every ten steps there is a door that lets you play one of two exciting minigames. In one minigame you and a bear (?) stand in a room while flames move around on the floor, and you have to time your jumps so that neither you nor the bear get barbecued. In the other minigame you get into a car and blaze down the road dodging boulders in what is supposed to be Spy Hunter with a sideways perspective. It doesn’t have anything to do with circuses, so I’m guessing one of the programmers stayed 10 or 15 minutes late at work to make this minigame on his own time, and the other team members let him shoehorn it into the game because he’s the only person with the key to the closet where they keep all the QBasic manuals.

Number of Bosses: There’s a boss at the end of each level, and none are particularly impressive or challenging. However, the first boss stands out from the others because hitting him stuns him for a brief moment and interrupts whatever attack he’s doing, and right after he recovers he can be hit again. So all you need to do is walk right up in front of him and pound on the B button until he dies or your controller breaks.