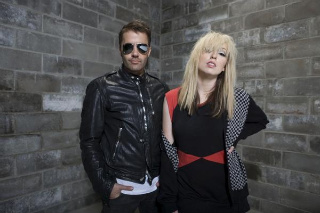 Ting One (Katie White) began her musical career with the girl group TKO, while Ting Two (Jules De Martino) started with the boy band Babakoto. Together they comprise The Ting Tings, a heavily hyped duo that makes generic garbage much like its members' past projects, but puzzlingly gets a pass because it's doing so knowingly. We Started Nothing is the kind of record defensively championed by its fans as "feel-good fun music" that, while it's "not a grand 'artistic' statement," "will get you off your bottom and on the floor." Translated, these phrases mean "I'm retarded, but I refuse to admit I require a special-education curriculum." It's delusional to confuse an innate inability to comprehend all but the simplest lyrics and sing-songiest melodies with a conscious, rebellious choice to embrace "fun" pop. 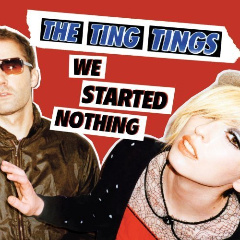 "We Started Nothing": Album title as disclaimer about derivative product.The Ting Tings scored a number one UK single with "That's Not My Name," in which Katie White rants about being called "Stacey" over poorly photocopied "My Sharona" riffs. As mistaken identity tantrums go, it isn't nearly as compelling as when Rick Springfield bitched about being confused with Bruce Springsteen. The group also hit the overseas charts with "Great DJ," during which White makes chimpish "ah-ah, eeh-eeh" noises. "Shut Up and Let Me Go" made a dent in America, thanks to iPod commercials and Gossip Girl product placement. With its jangly funk and conversational sass, "Shut Up" sounds like "Another One Bites the Dust" as conceived by cheerleaders suffering from human-pyramid head trauma.

Lyrically, the Ting Tings fancy forced rhymes (You're not adorable/I want something un-ignorable) and strained metaphors (don't you be a traffic light/you turn to red). Maybe they write that way because they're "fun." Or perhaps it's because their creative talents consist entirely of turning redundant, infantile chants and broad dance beats into short-bus soundtracks for the music-appreciation disabled.