After releasing two albums no one bought or acknowledged in any way, 311 appeared ready to retire onto singer Nick Hexum's island, where they could subside by lulling native animals to sleeping death with their mellow reggae ballads. Time had seemingly rid us of the menace, the way the band members' receding hairlines robbed them of their frosted tips. But 311's latest release Uplifter inexplicably became the band's highest-charting album, reaching #3 and once again making them relevant enough for public scorn. Welcome back, you worthless fucks. 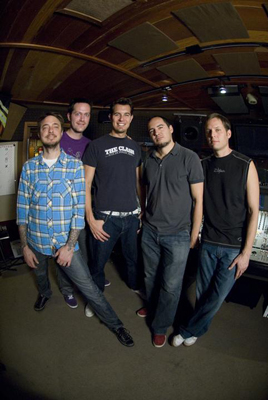 What 311 looks like now (an update, because no one has cared for years)."You'll love 311," said a high-school friend, whose rapid descent into drug-addled stupidity was making him an increasingly unreliable source of band recommendations and homework answers. "They're like a happy Rage Against the Machine!' His enthusiasm was spectacularly misplaced, but his description was damningly accurate.

Early-era 311 subtracted everything kids and kid-brained adults liked about Rage (metal-Zeppelin riffs, anti-authority posturing, violent fantasies, gratuitous profanity, "that cool T-shirt mascot guy") while retaining the rap-rock approach, which for Rage was a necessary evil. It's challenging to sound pissed about global inequities while singing melodically, and it's hard to spread revolutionary slogans to the masses through death-metal grunts. Also, traditional vocals were oddly incompatible with every Rage instrumentalist, one of the many reasons why Audioslave was fucking unlistenable. Anyway, 311 fans liked things better without scary aspects like loud guitars and thinking.

If they were barred from using the "Happy Rage" comparison or fruity words like "essence" and "vibes," 311 fans might struggle to define the band's appeal to a skeptical outsider. However, they can't do worse than 311 itself: "Knowing a little numerology and studying a little magic, which I do; in some factions, three is man and 11 is magic. So 311 is like male magic."

This is the gayest band-name description in history, especially coming from someone who answers to P-Nut.

P-Nut: Male Magic in motion.These days, Male Magic has abandoned its trademark hemp-necklace jams in favor of nauseating slow songs patterned after its career-derailing hits "Amber" (Hexum's hippie-poetry serenade to the future Pussycat Doll to whom he was briefly engaged) and "Love Song" (a Cure cover, performed in lobotomized fashion for Adam Sandler's walrus-vomit receptacle 50 First Dates). No songs quite as terrible as "Amber" appear on Uplifter, but this is not surprising, given that no songs as terrible as "Amber" exist anywhere but the unfortunate album that spawned it.

311 devotes most of the new disc Uplifter to romantic tropical lullabies, because it apparently still thinks it's soundtracking 50 First Dates. During "Daisy Cutter," the worst of these embarrassing tracks, Hexum croons "my Daisy/you make me go crazy." Having established a complete lack of shame, he then constructs a tortured analogy about Daisy being 'the bomb," and he even drops the phrase "beautiful disaster," because 311 fans like having references to the band's past pounded into their soft dropped-baby skulls.

Most 311 fans dismiss the inanity of the band's lyrics with "dude, don't worry about lyrics, just groove to the tunes." Then they start swaying and spinning to some melody only they can hear, as you back away slowly. As with pretty much any band, people who say "don't worry about lyrics" aren't worried about lyrics because they're too dense to follow melodies and discern words simultaneously. 311 fans that do pay attention to lyrics praise the band's members as heroic purveyors of peace and unity, because they're overgrown infants who seize onto Uplifter phrases like "one song could end the war" and "never-ending summer" as justifications for their own unfounded optimism.

"Hey You" stands out from the rest of the Uplifter sap by shockingly revealing that 311 is in love with music itself: "Music, you're my constant companion." For some reason, the worst bands always make horrible songs about how much they love music, unaware of the tragic disservice they're doing music by engaging in it. Also, 311 already titled an entire album Music. We fucking get it, very interesting, shitty band enjoys unrequited affair with its chosen art form.