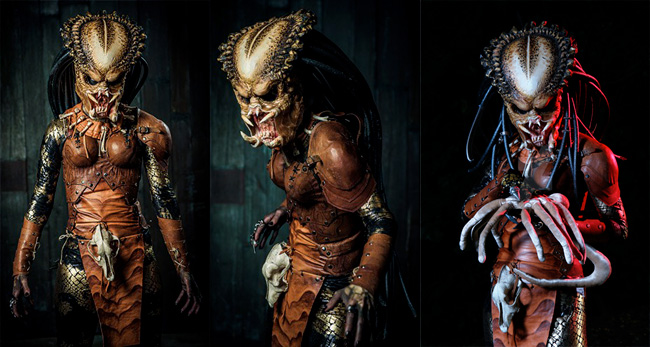 You have seen the pictures by now. 17-year-old Kylie Robertson's photos of her Predator prom dress caused a firestorm on Twitter. Kylie decided to go to prom wearing a full Predator costume, including mask with articulated mouth parts, hunt armor, shoulder cannon, and self-destruct wristband. She even brought along a severed human spinal column and skull.

The photos were initially received positively. However, the images went viral and attracted the attention of a huge number of activists, allies, and Predators who found the outfit to be cultural appropriation and offensive.

The early replies that generated the most response came from P'dah Tanuah, a Predator attending UC Berkeley with a major in hunting and minor in the soft meat.

He took particular offense to some of Kylie's props:

Many more responses followed including from other Predators and allies. In the aftermath of this outrage, I have seen a lot of people defending Kylie's decision to wear the predator armor and weapons to her prom. They say she is just a teenage girl wearing what she likes and finds aesthetically pleasing.

Some have mentioned that Predators on the Predator home world of Yautja Prime were not offended. Which misses the point entirely. Predators on Yautja Prime are not here on earth interacting with the soft meat. They do not have to cloak themselves to escape the hostile gaze of humans. They do not have to worry that their trophy cache will be discovered before their hunt has ended.

It is up to us, as allies of Predators, to hear their complaints and signal boost them. We must be there from the start, not analyzing or scoffing at their pain, but giving it the platform it deserves and calling out white people and other soft meat who treat Predator culture as an ornament.

Even the name "Predator" is mildly offensive. They are called Hish-Qu-Ten, which more closely translates to "Hunters" and suggests a more reasoned approach to their hunts rather than the animal instincts of predation. They rarely eat humans or other mammals, preferring a diet of fish and fowl, and the trophies they take are treated with the same respect we should treat their culture. Would you want your skull and spinal column to be a part of some dance for Predators?

Being an ally means fighting on the same side as the oppressed. You were raised in a racist, patriarchal culture, so your instinct might be to doubt the authenticity of a Predator's feelings or question their legitimacy because they were born in Ohio instead of in one of the blood clans on Yautja Prime. As long as they are living the Predator truth or descended from Predators, your duty as an ally is to amplify and agree.

Also, and maybe even more importantly, if they want to hunt you, it is your duty to pick up a gun and challenge them, even if it seems counter intuitive to being an ally. The soft meat is clever and they want a good hunt. Don't disappoint them.