This article is part of the YouTube Tour series.

Daryl "Fucking" Hall: A little bit about Dapp before we start watching his videos

DFH: He is apparently "the product of a secret government program to create the perfect funkdified super-soldier, in order to defeat the impending emo threat to all humanity."

DFH: This is some serious black-ops shit. 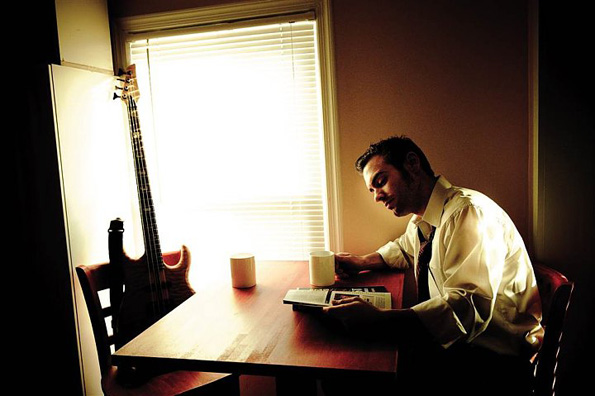 Satellite High: Can we talk about the picture where he's eating breakfast across the table from his bass guitar

SH: and staring longingly at it

SH: because that picture sort of makes me uncomfortable

DFH: The only ones I've seen are the ones where he's passed out next to his bass on the couch. I assume the breakfast picture is the morning after.

SH: there's a whole bunch of pictures in between but you have to sign up for the bonus content to see the actual bass-fuckin

DFH: After every show, Dapp slinks off to a new venue, hoping to find more innocent citizens on which to release his "badass power-soul free-for-all."

DFH: He also describes his band as a "raucous full fledged jazz-jam monster, like a groovin' Godzilla."

DFH: I don't want to stick him in a restrictive genre like "motown covers." After listening to a couple songs, his oeuvre is more "songs with iconic basslines, without the basslines."

DFH: Case in point, the first song of his I found, a cover of Peter Gabriel's "Sledgehammer"

SH: oh no i forgot to turn down my speakers and this came on REALLY LOUD and the funk hit me so hard i almost grew dreads

DFH: I really recommend watching the video fullscreen in HD. You can learn everything about this guy in the first fifteen seconds of the video. He counts himself in for a measure and a half, looks directly at the camera, and does the classic "Wait for the funk to hit you" head bob when the band comes in.

DFH: Man they do the "funk pause" twice, once in the intro and then once after the first vocals.

SH: this guy definitely practices in the mirror

SH: he winks at himself and shit and looks surprised when he plays a 'killer lick'

SH: i think gary is about seventeen

SH: they found him in third period 'jazz band' while ol' dapp was cruisin for chicks

SH: okay, it's over. i'm craving more. more of this funkalicious jammity-jam

SH: these guys really put the 'funk' in 'funktafied super-soldier'

DFH: Like Jean Claude Van Damme with an afro

SH: sweet i always wondered what it would be like if dads had a talent show

DFH: Again, an iconic bassline that Dapp wants absolutely nothing to do with.

DFH: I think the gradual tempo increase is suppose to be mind-blowing but after seeing Dapp count himself in wrong, I'm starting to think their drummer is just smart enough to speed up.

SH: their guitar player makes everything sound like a trip to the middle of guitar center

SH: this must be before Gary joined the band

DFH: I like to think Gary quit because his mom thought it was getting in the way of his studies.

SH: "all right dapp, whatever you say"

DFH: Dapp is from an alternate universe where 311 got into motown instead of reggae.

SH: i spent like half of that video trying to figure out what it says on the curtain

DFH: "World Cafe Live." One of the many venues destroyed by the funkdified power of the Dapp Super Soldiers.