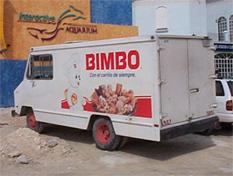 Cabs in Mexico don't have a set or fixed fare. They'll take you to your destination, let you out, and then demand an outrageously high amount of money. Do NOT ever pay this amount, as that is one of the biggest signs of stupidity in the world, second only to investing money in a dot-com organization. You should try to talk the driver down to a more modest price, a process known as "negotiating." However, unlike traditional negotiating (which most Mexican cabdrivers are used to doing), you must engage in a very confusing and complicated version in order to successfully wear them down. Observe this fictional conversation which really happened to me:

No matter where you go, there will always be a floating mass of warm air which smells like unrefined ass SOMEWHERE in the area. Nobody knows where these blobs of stench come from or where they are ultimately going, but they will linger over certain areas of Mexico for lengthy periods of time until children learn through evolution to naturally avoid these areas when traveling anywhere. The area essentially turns into the irradiated mass of land resulting from a nuclear attack in the Command and Conquer series.

If you pay a 180 peso cover charge so you may take advantage of an "all you can drink" bar hop, be advised that the only things which you can drink "all of" are limited to:

Red Koolaid which more than likely hasn't ever had any alcohol anywhere within a 50 mile radius of it,

Mysterious chemical X which is the color of a urinal cake and tastes about 60 times sweeter.

If a short Mexican woman comes up to you with a whistle and a bottle of Sex on the Beach which she wants to pour down your throat, do NOT allow her to. They cost about as much as the Mir space station and taste even worse. If the lady then asks for a tip after suckering you with the multi-million peso drink scheme, cooly reply, "you know, all those stereotypes about Americans owning six handguns each is true. In fact, I have two children who don't own any handguns, so I've had to pick up the slack for them. Do the math, you grande whore." Note the fluent Spanish insult I ended that quote with.