The folks at Skymall follow a simple marketing strategy: target people when they're weak. Since commercial air travel makes folks fear for their lives, they'll be happy imagining any future on the ground, even one surrounded by the dumbest products on the planet. As part of their probationary restitution, Nick Arizona and P. Jordan Dimebag sat in on Skymall's holiday focus group and produced the following observational log. We hope this seven-part guide aids in facilitating a festive holiday shopping season! Check out the previous guides here: Part 1, Part 2, Part 3. 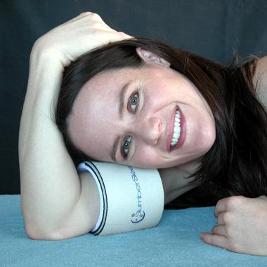 The SlumberSleeve sleeve pillow is a first of its kind comfort device designed to prevent that numbness or achy feeling and enhance circulation. Since our sleeve pillow is worn over your arm, wrist, leg or ankle, it moves with you and you can change sleep positions naturally - and sleep like a kid again. (Skymall)

P: Wake up giving yourself a headlock.

N: It'll keep your bicep cool in the summer and warm in the winter.

P: Your arm made night manager at Steak 'n Shake.

N: It makes me remember when I was just a kid, and I was able to fall asleep anytime, anywhere. Now I wish it could be like the old days and my parents could beat me to sleep again. Those nights I spent resting on the cushion of my own puffy and bruised flesh were the sweetest of my life.

P: I never had the luxury of falling asleep on an arm sprouting from a coffee mug. Do you think she's pretending to be friends with the arm bully, or that it's slammed her head into the table so many times all she can do is smile?

N: I can easily imagine the armbully, and am terrified of him. He'd make the dog shadow puppet and make fun of you at night. "Tryin' to put the cuffs on me, eh, greaseball? Well, I'll teach youse a lesson ya won't forgets by mornin'!" And then the last thing you'd remember was the armbully grabbing your nutsack.

P: The armbully looks rather pale. I thought that cushion thing was a wrestling belt awarded for busting dorkheads, but now I think that it's choking him to death. It's a sphignomonometer from the wrong side of the tracks, evening the odds for bullied children.

N: He's pale because he's been in a cast. She was able to defeat the armbully one night by armwrestling (the only proper way to fight an armbully), but now he's busted out. Actually, maybe they're friends now. Like, they can't believe they ever fought before because she melted his heart with all the writing she did on his cast. She drew a rainbow, for chrissakes!

P: Look what she wrote on the sphignomonometer that's strangling him -- "Amore Stretch," Stretch Armstrong's baptismal name. I don't think they're working together. If her head were on top of the fist, it would look like Rodan's Thinker. Right now this picture is a cross between a herpes medication ad and a women's self-defense seminar.

N: Nah, I think they're buds now. They have this picture up on the bookshelf in a frame they made at the craft store. Across the bottom they wrote "Just Pallin' Around!" in Puffy Paint.

P: They're in the middle of a spat. Armbully is refusing to put any makeup on her and insists on pulling back her hair even when she tries to hide her face.

N: He's acting out of self-preservation. He's never forgotten that time in eighth grade when she made him journey down the front of Kyle Higston's Wranglers on the bus ride back from Six Flags.

P: She's pulling a reverse-Sharia law, using her right hand for all the disgusting bodily tasks and the left for drawing henna art on the right.

N: If that's the case, then the left hand just got its comeuppance. Look at it there, lying limp and defeated. The right has risen and crushed its competition.

P: Christ, is the left even still attached to her body? I suppose missing an arm makes it easier for the other one to dominate clothing decisions. How long had she been naked when this photo was taken?

N: Losing one arm makes the other one stronger. That's known as the Daredevil Principle.

P: According to the Red Rover Principle, she's losing. This is the last photo that will feature a shaved right armpit.