The folks at Skymall follow a simple marketing strategy: target people when they're weak. Since commercial air travel makes folks fear for their lives, they'll be happy imagining any future on the ground, even one surrounded by the dumbest products on the planet. As part of their probationary restitution, Nick Arizona and P. Jordan Dimebag sat in on Skymall's holiday focus group and produced the following observational log. We hope this seven-part guide aids in facilitating a festive holiday shopping season! Check out the previous guides here: Part 1, Part 2, Part 3, and Part 4. 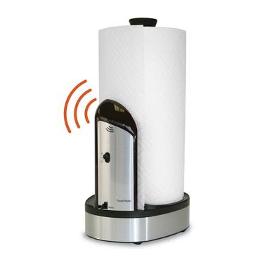 Dispense paper towels with a wave of your hand! No more wasted paper towels! The Towel-Matic's sensor-activated control dispenses one sheet, two sheets, or the new half sheet with just a wave of your hand. It never unravels. Built-in optical sensor automatically identifies the perforations on the towel and stops right at the line every time. One-handed operation guarantees perfect tearing and helps prevent the spread of germs. (Skymall)

P: I think this is one of the few ways to actually waste paper towels. I've never had a problem getting the right amount. This reminds me of a plastic rose that was sold at gas stations that turned out to be popular because you could use the glass tube they came in to smoke crack. People are buying the Towel-Matic for another reason.

N: I've never had a problem with paper towels, either. I just slide a fresh tube on a paint roller and clean my spills that way. For bigger messes I pepper the area with toilet paper rolls beforehand.

P: Greek restaurants use this to spin gyro meat. I think think they also use the gyro meat to clean up spills, because that shit is dirty.

N: I'm wary of any meat that claims to be "shaved." Shaved beef? Shaved lamb? That all says "houndroast" to me. Don't get me started on pulled pork.

P: They really don't take advantage of the tears-along-the-perforation technology. They could just put a whole cow on this and give it the USDA cuts guideline. Right now they're using it so they never have to touch the gyro meat with their hands.

N: You know there's a one-armed cook who got fired from a gyro place because he was drying the dishes with his back hair, but he thinks it was because he only has one arm. He's gonna show up Monday morning with one of these and be all, "Hey guys, take me back! I don't need two arms to get the towels anymore!" And the guys in the store are gonna crouch down below the windows and stay really quiet and pretend they're not there, but the guy isn't gonna go away for, like, 45 minutes.

P: I like that it's motion-activated because you could put the roll in facing the other way and your grandma would wave at it for like two hours.

N: My grandma waves at her paper towels already. Old people are funny like that.

P: Get her the Towel-Matic. It'll be like Strega Nona but instead of pasta she'll have to eat hundreds of paper towels.

N: I think it'd be worth giving somebody one of these as a gift just to be around when the batteries run out. They'll be so habituated to the motion-sensor that they'll just stand there waving blankly and waiting for their towel. Hell, I'd take the batteries out every time I came over and then suggest some sloppy joes.

N: You could rig up a dozen of these and TP somebody's house with a single grandiose wave.

P: Italian restaurants would be ruined by the paper towel expenses, and that's not even including the inevitable accidents. "Uh oh, a grease fire. Well, I'll just smother the -- wait, don't unroll onto the stove!"

N: I think the true purpose of the Towel-Matic is clearly killing mummies.

P: Dying next to one of these things would be the least dignified fates one could suffer. They're trying to say their last words and paper keeps going into their mouth.

P: It's like a baby monitor for old people, but instead of being woken up in the middle of the night to see your grandparents wetting the bed it just goes to work. Unfortunately it would be like those products that have two weeks' worth of dog food for when you go on vacation -- it would get used up the first night.

N: Plus you'd have to train grandpa to wave when he pees. Either that or hook up an elaborate Rube Goldberg device that includes quicklime, white phosphor, and a large moth.

P: After the boot-wheel knocks the piano onto the angry convict, grandpa is rocketed off to a retirement home. Those red lines -- does this eat small insects?

N: They look like the stovetop burner icon. I figured the motion sensor heats up to train you. Either you adapt and wave for your towels or your fingers get so covered with blisters that you can't touch anything anymore.

P: A wave is virtually the same motion as tearing a paper towel. This isn't labor-saving, just labor-substituting. It might as well have you gargling for thirty seconds.

N: Remember, this doesn't tear the towel for you, it just unwinds it. You're still gonna have to use some real muscle to rip that paper apart. I'm worried that without the down-pulling motion as a warmup, the sudden tearing will make people seize up with cramps. That's why a quick jog and some stretching is so important before you attempt any heavy drying.

P: If I ever want to put a Greek restaurant out of business, I'll just take a busload of kids there on a fieldtrip and have them wave goodbye at the end. The entire staff will suffocate in a monsoon of grade-D meat.