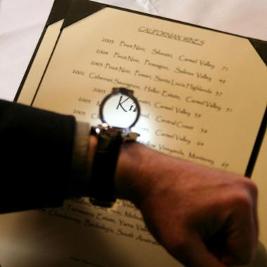 From lighting the path for you and your dog to lighting the lock to get in the door, we know you will find thousands of uses for the practical and functional iBEAM Deluxe Magnifying Watch with Flashlight! Simply push the button for the flashlight on the watch to provide light to see what you're looking for. (Skymall)

N: I hated the restaurant level in Goldeneye.

P: "I'll have the... K... L... Goddamn it, a third calamari appetizer?!" I'd be worried about putting the watch on the wrong wrist and blinding myself with the magnifying function.

N: People don't tend to think about the hazards of sporting superspy accessories. They'll be fooling around and then somebody catches a monofilament grappling wire in the throat.

P: Really? Most things marketed as "superspy accessories" are for seeing through women's clothes and end up in the hands of twelve-year-old nerds anyway. I suppose the biggest danger is you using your X-Ray glasses in the cafeteria and your mom shows up with your lunch. On the other hand, the iBEAM, like most of Apple's products, will attract the crooked eyes of bullies and be turned against the user. Imagine the armbully holding you down in the sun and baking your acne.

N: Superspy bullies can be brutal. Once a kid at school enveloped me in his inflatable coat and farted inside it, like, six times.

P: A kid in my class assembled a comb, a hotdog and a test tube into an undetectable whoopee cushion. A single blast killed my student government asperations and the treasurer.

N: I knew a kid who suffocated when a bully painted his entire body with White-Out.

P: I was drugged with medicine that gave me an unhidable boner, snapping my binder shield in half. Fortunately another kid forced me to eat a shaker of salt and I vomited most of the medicine back up.

N: A kid hit me and I told on him, but when the teacher asked him about it he pulled up his shirt and he had three nipples, so I got sent to detention.

P: After I got plastic surgery to look Jewish, my bar mitzvah was ruined by a man wielding a razor-sharp yarmulke.

N: In fourth grade this kid with metal teeth focused the power of the sun through a diamond and used it to shoot me with a speargun, and it made me cry in front of this teacher I liked, Mrs. Honeyed Vaginafinger.

P: Usually when 007 has a gadget it's supposed to be disguised as something else. Would an enemy guard just assume he has a small toilet seat on his wrist?

N: The thing is, the iBEAM isn't useful enough to be considered a gadget. It's, what, a magnifying glass with a light? No can opener? No nail file? When the chips are down, can you use a magnifying glass to escape a prison cell? I'd think the guards would confiscate the watch because it would be kind of useful if their prisoner knew what time it was.

P: Maybe James Bond is just getting old and he has his prescription lenses hidden. Unfortunately his vanity about his eyesight leads to people thinking he's senile because he has a watch on each wrist.

P: When he's contorting himself to look through both at once, an American tourist would mistake him for Madonna from the "Vogue" video.

N: So the blame for Bond's shameful downfall can be placed squarely on the iBEAM, and not Roger Moore's liver-spotted "gentle humor"? In that case, the iBEAM must pay. Keep on your guard; it can see you coming.

P: I'd say that only Moore's grandfatherly image could withstand the indignity of asking the Bond girl to help find his watches the morning after. "They're still on your wrists," she'd say, averting her gaze.