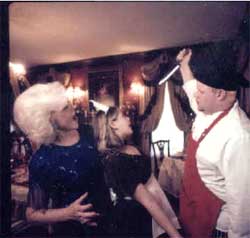 Murder most internetFrom the "wah wah, I'm a big baby and this big baby uses the internet" department:

Bad behavior in the blogosphere - Death threats against a popular tech blogger this week have ignited an online firestorm about free speech, civility and sexism on the Internet.


"It's easy to say, 'Get over yourself, this is the Internet,' but would I bet my mother, daughter or sister's life on it if those pictures showed up and I didn't know exactly who was behind it?" she said. "Even if the odds are low, the stakes are high."

Can somebody please explain to me how is this news? Is getting death threats from anonymous people on the internet some incredibly new and fresh phenomenon sweeping the globe by storm? Up until March of 2007, were all internet users kind, courteous, eloquent pinnacles of human perfection?

My informal survey of myself says "hell no" to just about every question I asked, and then a couple more I was too stupid to think up. I guess it didn't matter folks were threatening to murder one another in newsgroups back in the mid-90s, because "A Ruckus In Rec.Insults.Your-Mother" just didn't have the same catchiness as upchucking the word "blogosphere" for the seven hundred millionth time this week.

So let's take a look at this groundbreaking news item that was so important it's been reported on countless news sites.

Am I missing something here? Nobody was murdered. No crimes were committed. The same thing that's been happening on the internet for two decades has happened yet again. The faceless masses make baseless asses of themselves; it's the nature of the internet.

My first death threat came to me in February of 2000. I had written a front page update (that's back when I actually used to write things) making fun of some white power nutballs who ran an elaborate webpage crusade against the Jews and the blacks and the black Jews and the Jaws. Whenever you trash white trash, a familiar flood of email slams into your inbox, all making the same critical points that are so vital to survival:

1. You're stupid and don't understand how everybody is conspiring against the white man.
2. Hitler, much like Jamie Moyer, was really underrated.
3. You're definitely an evil Jew. 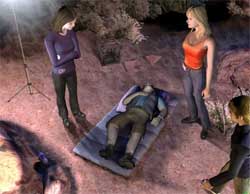 This man died on a sleeping bag. What a way to go!You can't argue with a white supremicist because they know they're right, just like how they know you're an evil Jew. It's like arguing with a religious fundamentalist or a conspiracy theorist or a wheelbarrow full of scrap metal. The same applies to the folks who hate me; they're right, I'm wrong. They're good, I'm evil. Black is black and white is white and Jews are horrible. No matter what I do, it is wrong, it is bad, I am dumb, and the only person who knows how to do my job is somebody who will never do my job (them). That's the nature of the internet, a place where the world's population can join together and spend their lives complaining about how other people spend their lives. I've heard rumors there are other uses for the internet, but I haven't discovered them so far. One of them may involve sending weather forecasts to your grandma.

Anyway, I've been running SA for so long that my internet assassins have pretty much given up their quest to spook me by claiming they're going to sneak into my bedroom in the middle of the night and smother me to death with a printout of IRC chatlogs. They've progressed to step two, which is "threatening to murder my two-year old daughter Lauren." Don't ask me why nobody has ever bothered to wish death upon my wife or dog; perhaps they're immune to the internet.

Without further ado, I present to you old media idiots inarguable proof demonstrating that goofy bitchy broad has absolutely nothing to whine about in her blogoriffic blogorama. I give you an email death threat against my two-year old daughter.

Collateral damage. Remember those words when I fly to Lee's Summit, kick in your door, duct tape Lauren Seoul's mouth, fuck her in the ass, and toss her over a bridge. 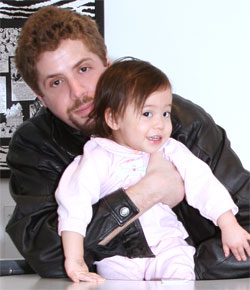 THE TARGET: This 2-year old. THE GOAL: A very tall bridge.This was the latest death threat I've received, a little nugget of insanity written by "Mark Pomerantz," a guy kicked out of the University of Colorado at Boulder, a man absolutely furious I banned him from our forums. Yes, that's correct, somebody is threatening to rape and murder my two-year old daughter because he was banned from an internet forum. At the risk of sounding like a psychologist, I'm going to climb out on a limb here and claim this person isn't exactly grounded in reality. It's like detonating a series of truck bombs outside an AMC movie theater because they kicked you out of "Norbit" for talking too loudly when Eddie Murphy had a harpoon shoved up his ass. I have to give the guy extra points for including her middle name in the email. It adds a real component of credibility to the threat. I'm sure the author wracked his brain trying to figure out a method that would convey exactly how serious and devoted he was to achieving the lofty goal of raping and murdering a two-year old. "Aha, I will type out her middle name! That really proves I've done my research on this one!" he triumphantly shouted to his monitor. "I should probably also mention something about throwing her off a bridge. If the child molestation thing doesn't really get him, then the bridge thing will. Webmasters hate bridges!"

So how is some "blogger" receiving a death threat national news? This isn't anything unique or revolutionary or even interesting; your position as a public figure is directly proportional to the amount of people who will despise you. Some folks loathe me because I earn money running a comedy site containing the greatest writers and forum members on the internet. Such jealousy forces people to lash out in any way they can, desperately trying to hurt or get under their target's skin any way possible, as long as it does not require leaving their chair. The result? Yet another internet death threat.

Until I can precisely determine why a person receiving an internet death threat has been deemed "news," I'll continue to roll my eyes at the media's fascination and confusion with the internet. I'll also continue to receive emails from folks explaining how they're going to murder my daughter and screw my dog because I claimed Goku wouldn't be able to defeat Vegeta in a calligraphy contest. Which he wouldn't, by the way.

After all, this is the internet.