WHERE THE SHIT IS MY TV SHOW???

What up my niggers???What is up my little bitches!?

You know this is one nigger that can't not stay out of the headlines. The mainstreet media is all over the Palin family like 24/7 doing stories and trying to get interviews and by extension that means they are all up on my jock too.

Yall might have seen my girl Bristol up on that greta von supstern show with the man with the long hair. The dude who follows the bread crumbs and put all them niggers in ovens. Bristol did some kind of exclusive interview with that gingerbread motherfucker talking about Tripp (the new baby) and all of the bullshit we had to go through like telling her mom and my mom and whatnot.

Bristol is mrs. Palins daughter you can tell because she was all political and diplomacies with that shit. Bristol didn't even drop one bababooey in the whole thing although I guess Fox could have used computers to take that shit out or whatever.

Okay so check it out let me set the scene. Just like Bristol said we were up at her mom's giant house in Wasilla and all the kids were upstairs and it was just me, Bristol, bristol's fat friend rita, todd, and mrs. Palin. Of course Trunk was also there he had just been born and he was still in that little infant phase where you could just put that fucker in a little basket with a soup bone and he would suck out the marrow and be cool. Noisy eater gobbling up them bones, but he didn't cry much back then. 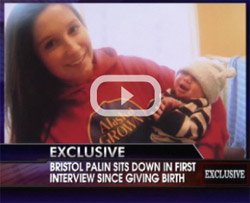 I told bristol not to do no interviews but she can't not do what I tell her not to do.Anyway, Mrs. Palin was wearing one of them tops you know the ones with the swoop in the front so you can see titties. I kept staring waiting for one of those nips to pop out so I could take some pics with my cell phone. Todd was drinking hot chocolate with marshmallows I remember that shit because he had a marshmallow mustache stuck in his regular shitty little shop teacher mustache.

I tried to point it out to him while Bristol was blabbing on about whatever emotional shit but I think todd thought my gestures meant something else because he started popping boners and looking all gay at me. Which is usual for a dude that gay (as hell) but whatever I shut that shit down immediately.

Anyway, Bristols fat friend Rita aykayay Frito was there too all holding on bristols hand getting her lard up on my woman and giving me dirty looks like I was being intersponsible or some shit. I wanted to just straight up say "bitch, if your such a good friend then why were you puking all over my dick at that party at Tucker's dad's ice fishing shack????" Of course I didn't say that shit because a) bitch is fat as hell I don't want nobody knowing I even did that shit and b) that would have only started some other tamjent of conversations and dramas and what have you.

So fuck it I just sat back, I had done like 75 bong hits before we went in there anyway and when Bristol wasn't looking I drank some cough syrup too so I was robotrippin and just sort of pissed off. I knew not to say shit in that condition.