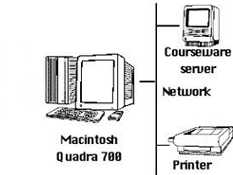 A diagram of my broken computer system. NOTE: This is not my computer. Also, I don't have a network. Or a server. Or a printer.

As many of you out there might be aware of (or not aware of, I have enough trouble keeping up with my own interests much alone yours), I have had a critically broken version of the Internet for the past 10 days or so. You see, I made the terrible mistake of letting my boss mess around with my computer Saturday night, resulting in a comical series of mishaps which were not very comical at all.

MY BOSS: "Hey Rich, I can get your Linksys router working." (Fiddling with the router)
ME: "No you can't."
MY BOSS: "Yes I can, watch this." (Presses seemingly random series of keys and unchecks / checks boxes according to the phase of the moon)
ME: "You're going to break my computer."
MY BOSS: "No I won't, just give me a second here." (Avalanche of error messages cascade onto screen) "Hmmm."
ME: "You just broke my computer."
MY BOSS: "No I didn't. Let me use the Microsoft Networking Wizard! The Microsoft Networking Wizard fixes everything!" (Networking wizard comes out and shoots himself in the head) "Hmmm."
ME: "My computer is broke."
MY BOSS: "No it isn't." (Looking at computer, which is obviously not working) "Let's do something else."

So he somehow managed to nuke my entire Internet connection on my main PC, demolishing it to the point where the tech support clowns from @home essentially told me to give up and throw my computer into the ocean. Luckily I was able to set up a connection on my backup computer, the PC previously in charge of playing Winamp and crashing every time an air molecule collides with its outer case. 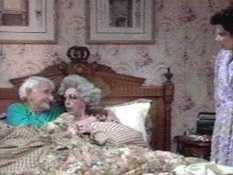 Welcome to the Internet.

While my Internet connection was down, I realized how different my life was without access to the online slumworld. For example, if I were to open up Internet Explorer, it wouldn't be able to connect to any websites. That was the biggest difference between being online and offline. However, there were a countless amount of deficiencies introduced into my life upon losing Internet access. Being a native webmaster from the webmastering country of Webmastervania, I was forced to create an offline life that mirrored my daily experiences online. Here's how I was able to emulate being online without ever turning on my computer:

1) I gave the keys of my apartment to 45,000 people and let them come in whenever they wanted. They all crowded in and sometimes made the floor collapse like footage from "Israel's Most Funniest Wedding Videos." After I had paid carpenters to repair my floor, the crowd rushed back in again and began eating all my food. A few members of the public hobbled in and announced what a shitty apartment I owned. They began screaming over and over how ugly and tacky my place was and how utterly furious it made them, yet they never left back through the open door. These people simply sat around and complained repeatedly while eating all my food and slapping my cat's ass. Then they demanded I purchase better food and get an improved cat's ass. When I refused to cave in to their demands, they resorted to shrieking profanities at the top of their lungs, damning myself and my apartment and explaining how much they absolutely positively 100% didn't care about either... yet they refused to ever leave or stop talking about it. As far as I know, they're still whining, only I can't hear them now because I summarily removed their heads from their bodies.

2) I paid for a few hundred individuals to follow me around and correct any grammatical or factual errors I made during any conversation, both real and imaginary. A few of them offered the additional luxury of explaining how unfunny I was, as opposed to two years ago when I apparently was the pinnacle of humor or at least slightly less of a jerk than I am now.

3) I invented a contraption that, upon opening and reading a magazine, launches smaller magazines into your face. For example, pulling back the cover of Knitting Monthly triggers multiple copies of Monster Truck Rally, Marlo's Assault Rifle Quarterly, and Hindu Dance Sperm Party to spring out and slap you in the face until you fall over and vomit urine. The only magazine that I didn't rig was Maxim Magazine, as it would be pointless since 98% of its target audience is illiterate and attracted solely for the pictures of breasts and cars on fire underwater on top of a horse inside a fighter jet.

4) I purchased an address book and listed inside a few of the businesses that I regularly visit. Immediately after writing them down, people began calling me and demanding I write down their addresses in my book as well. After driving my car to their location and checking them out, I realized they were all burnt-down crackhouses featuring nothing but a dirty cinderblock and weeds the size of pregnant Buicks. The owner of the residency would lie around in a pool of his own filth, composing letters to everybody in the entire world, urging them to visit his house and stare at his unchanging decomposing cinderblock every day. If I didn't try to convince everybody else to go to the guy's place and stand in a mound of his own toxic waste, he would send me a letter explaining what a jerk I am and how I'm not funny and my apartment is ugly and I was funnier two years ago and I should die and I was never funny and I suck and I'm ugly and I'm not funny (repeated for emphasis).

After a week and a half, I had pretty much gotten use to my online simulation. It felt like nothing had changed and my life was the nonstop roller coaster ride of thrills and chills that it normally embodies. Unfortunately the cable connection was fixed on my backup computer, so I soon gained access to the Internet once again. Now I can finally experience the online version of these events, with the added bonus of being exposed to pictures of humanoid-shaped foxes having gay sex with each other. What a relief.

PS: To any of the people who emailed Zack to bitch and complain about their perceived lack of quality in his updates, I formally offer you the chance to anally violate yourself with the regulatory street sign of your choice. I don't like to make sweeping generalizations here, but I hate every single one of you and would replace your head with a rock if I had the opportunity. If you're disappointed with the free entertainment on this site, fine, write about it on your shitty Angelfire Dragonball Z site or send AIM messages to the other Korn fanclub members. Just don't email us, demanding we conform to your high standards of "writing in all lowercase and misspelling the word 'fuck' repeatedly."