Do you ever get the feeling that you're trapped? With this week's line-up, you could forgive us a touch of claustrophobia. First, we get stuck in a cave with Sanctum, then we get stuck under a rock in 127 Hours, and finally, we get stuck with a terrible, derivative, teen-pandering PG-13-rated "suspense film" called The Roommate.

EXPECTATIONS: I don't really have much enthusiasm for Sanctum. Plastering James Cameron's name all over the promo campaign and flying the "based on a true story" banner are not good ways of capturing my attention, especially when the aformentioned true story is "A bunch of Australians go spelunking, most of them die."

REALITY: Sanctum involves not-quite-interesting characters doing not-quite-boring things in caves and dying. It's the kind of film where anyone who sees it will have forgotten it within a week. That's not to say it's a bad film. It might even impress you, if you've never before seen a film or any parts of a film. But it really does nothing interesting with its running time outside of a small handful of tense moments, most of which are hampered by sheer predictability.

Sanctum opens with the arrival of American entrepreneur Carl (Ioan Gruffudd, more on him later) and his girlfriend Victoria (Alice Parkinson) in the unexplored cave Ela Esa in Papua New Guinea. There they meet the disillusioned Josh (Rhys Wakefield) and his tenacious, cave-obsessed father Frank (Richard Roxburgh). Frank has been avidly studying this massive cave for years, driven by an almost religious zeal to uncover that last unexplored place on Earth. After a storm floods the cave, Frank must lead a small group of survivors to an exit that has never been found. 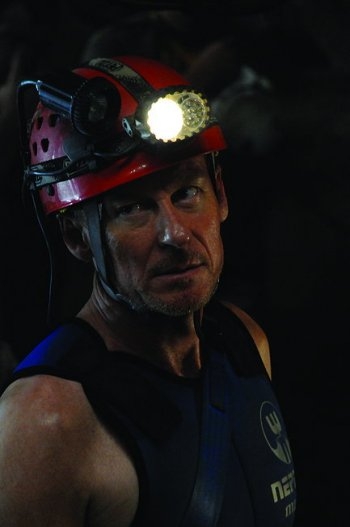 I'm pretty sure the entire film is lit by head-lamps.It might sound like an interesting survival thriller about the untapped potential of the planet, but it's really just a series of deaths. Ever wondered how many ways you can die in a cave? No? Well, this film will show you literally all of them anyway. It doesn't help that every death is preceded by Frank telling someone not to do something. The moral of the story is "always listen to the grizzled, middle-aged Australian teacher, because he knows best."

At a certain point, late in the film, Sanctum suddenly decides it is entirely a story about a father-son relationship. (It picks up this contrivance as soon as all the other characters are dead or lost.) Out of nowhere, these two characters start bonding and even enjoying themselves, and the film settles into this idea as though it were limply pursuing it the whole time. Hell, even I started to enjoy myself, watching these two characters depend on each other and become a family again in this dangerous setting. It's just such a damned shame that they only pick this up so late into the running time and drop it soon after, when things start to get really silly.

That brings me neatly to my main gripe with this film: Ioan Gruffudd. What is the appeal of this man to Hollywood casting agents? In a film populated entirely by Australians, you needed to cast an American character and Ioan Gruffudd is who you ended up with? I suppose that casting him as an inherently unlikable character works on that two-dimensional level you were going inexplicably going for, but wouldn't a more natural performer have given a more sincere approach to this character? That might have made his third act "surprise twist" a little more believable.

Yeah, I'm pretty much going to come right out and spoil it because you can guess how the whole thing ends by watching the trailers; Ioan Gruffudd gets really sad and then suddenly transforms into a cartoon villain, murdering Richard Roxburgh for no reason. I'd like to congratulate the writers for giving absolutely no emotional justification for the character change, and I'd like to congratulate Ioan Gruffudd for taking that material and deciding that going all the way from unlikable dick who could have been redeemed to Cobra Commander in a heartbeat was the best approach. Maybe I'm blaming the wrong people, maybe that scene was written with some visions of great emotional power but destroyed by terrible acting. Maybe I should be blaming the director, who watched that performance and said "Yes, Ioan, that's exactly what I wanted." 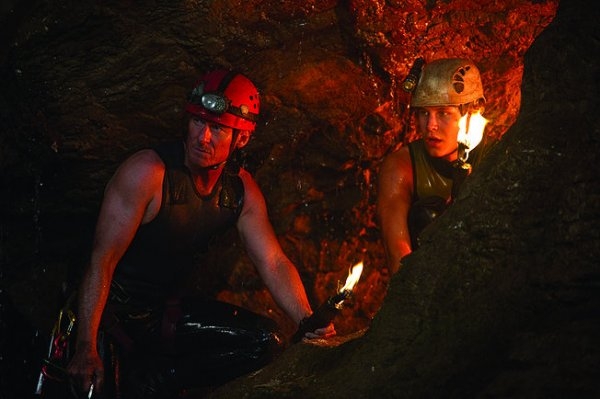 No, I was wrong. Sometimes they use torches.

Of course, you know the director of Sanctum, don't you? No, it's not James Cameron, it's some other guy you've never heard of. Plastering James Cameron's name all over this -- in spite of his mere executive producer credit -- could easily be construed as an attempt to cash in on on his success with Avatar. Well, in some ways you'd be right, but I get the feeling that the shadow of Cameron looms large over this film due to his enthusiasm for the furtherment of filmmaking technology. It's no coincidence that Sanctum not only features cutting edge 3-D but also a plethora of underwater 3-D scenes. The underwater photography is genuinely impressive, but I don't think we're looking at a landmark of cinema here, just a dull advertisement for avoiding a career in spelunking. Take note: putting yourself in certain-death situations will almost certainly lead to your death.

MINORITY REPORT: I never saw Sanctum. Is it anything like The Cave? Let me put it this way: Do they fight monsters in Sanctum, because The Cave is about bat monsters. No? Then never mind. - Joseph "Jay Dub" Wade