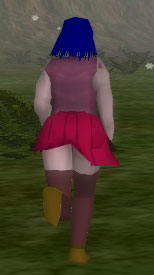 Mmmini-skirt.I signed up with the user name "Darkcloudsephiroth" so that I would blend into the community and hopefully get along with the other DarkClouds and Sephiroths that played this game. I now had what people world over would kill themselves for (or as result of), a Gekkeiju Online account!

I tried to make a male character, but unfortunately the only selections I had were skinny nazi woman and fat nazi woman. As soon as I was in the game world, I was staring at an ogre that wanted to go back to bed. As I find out later, my character was date raped the night before. This explains why I can only pick a woman and so far it fits into the anime genre. I quickly limped out of that room and ran into another guy who also had some attitude with me. I think the game was trying to be edgy because almost every NPC somehow fits "fuck" into each conversation. One NPC that was particularly nice was the black and white angel with gigantic wings. I did not have time to converse with this beauty of beauties for I had to save the world of Gekkeiju!

Eventually, I accidently stumbled outside and attacked the first thing that I saw. Another case of humor failing miserably (like this article) was an enemy NPC named "Sukmywang" that spammed things like "lol burring people is dumb" and "ur a nooblar". He re-spawned pretty quickly so I kept killing him until he dropped a mini-skirt. Eager for another ogre raping, I slapped that on so fast it would make any anime fan boy jealous.

The programmers of this game decided that strafing animations were for fools, so when you try to go left or right, your character does a very strange sideways moonwalk as it continues to run foreward. In fact, even the backwards animation is the same. No matter what direction you are going, your character continues to try and run foreward. I tend to think I am a fair person, so I will give this game another chance to impress me with some real combat!

I ran into an ogre captain and figured I would get some sweet revenge on some ogre rapists. Unfortunately, I was slaughtered like the pig and was subsequently raped again. Just as I

Beware of the cows.was about to pick up my torn and stained mini-skirt and go home, I noticed that someone tried to greet me earlier. After striking a short conversation with this person, I was granted a few emoticons and a warning about nearby livestock. It basically came down to killing giant worms over and over until I was strong enough to butcher a cow of my very own. Before I could accomplish this great feat, I was struck down by something no one could see coming, the server crashed.