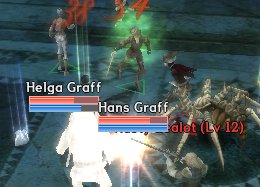 You can experience the whole game by looking at this picture.IMC Entertainment saw it fit to leave the only choice concerning character customization to be gender, but look at the wider picture here. The game has five classes. Adding in how each can be male or female, that gives the player 10 different ways to change a character's appearance.

Not since City of Heroes has character creation been through such a drastic change. After I finished molding my team of three pure blooded Aryans, I took my first step into the expansive world of Granado Espada.

That was all I needed to realize this game is complete crap. Just one step out of town, and I was done. My guys shot a hopping crocodile, a melon popped out of it's corpse, and I got a minuscule amount of experience. A "GAME OVER" or "YOU WIN" screen could have popped up and I would have been happy to be done with this garbage. Yet I pushed on with the aide of a very important button.

Pressing the space bar while playing Granado Espada sets the characters to patrol mode. While in this mode, my team would grind by themselves without any input at all by me, the player. It is entirely possible to get to the max level of 100 this way, only checking on the game to move the characters to a higher level area.

What this all boils down to is IMC Entertainment downloaded ProgressQuest, removed all the character customization and interesting monsters, then spent three years and 56 million United States Dollars on generic anime graphics.

Apart from the whole game playing itself problem, Granado Espada is filled to the brim with text and English errors. If all I did was talk to the NPCs without stepping outside of town, I would be recommending Granado Espada to everyone I know. I wouldn't want anyone missing out on a game filled with conversations about magic tea boxes, food materials, fantazzies, and Tingle's creepy half-brother.

Diligently I continued, clicking through pages of broken English and narrowly avoiding the dreaded magic ream words. Finally one of the NPCs stopped babbling about tea fantazzies long enough to grant the privilege of going on a quest to kill a demon rampaging across the New Worlds or whatever Korea thinks happened during the colonial times. This turned out to be a very good guess since that is exactly what I needed to do.

No demon could ever hope to stand against the Germanic fury of my master team, and the beast was easily slain. On my triumphant return to town I found out that quests are a waste of time, and more experience could be made having the game grind against Native Espadian tentacle monsters.

My reward for slaying the villainous fiend was a shitty piece of paper. I forced one of my guys to eat the parchment since nothing in Granado Espada makes any sense in the slightest; and his pure digestive tract converted the fibers into experience points. His experience skyrocketed from 12% of current level completed all the way to 14% of current level completed. I knew I should have ignored all the quests and stuck to typical Colonial era prey such as bison, leaping crocodiles, and man eating plants.

I've played plenty of MMOs in my time; from the simple days of killing rats in the sewers under Britannia to clearing out rat infested mines in Azeroth, and I have to say Granado Espada is simply the worse MMO I've ever experienced. Not once did I even see any type of vermin, let alone a rat, and in the MMO genre that's just not right. MMOs that lack game play usually try to mask their shame by becoming a chatroom for dress up dolls, yet Granado Espada can't even do this right. My advice to you, IMC Entertainment, is to look into your community. Among your players are brilliant 3D modelers just waiting to be discovered. I'm sure your run away and bloated budget can handle the cost in Pocky and wall scrolls it would take to employ these talented beings.

I'd like to thank Khad, Pipe Rifle, and Chem-Comando of the SomethingAwful forums for being the only ones foolish enough to follow me into the abyss. Join us in our next adventure into the sunny lands of Fiesta!