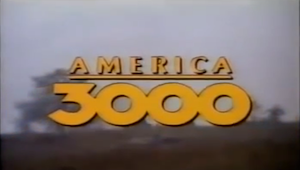 Overview: In the year 3000, a nuke-ravaged America has become a stone-age society where women rule with an iron fist. A planet where women evolved from men?? You maniacs! You blew it up! Damn you! God damn you all to hell! Also, for some reason Chewbacca's inbred half-cousin wanders around the post-apocalyptic future grunting at everyone and/or holding up a boombox.

The Case Against: Nobody was hoping for a female equivalent of Gor, and even if such a hypothetical person existed, this would be just as big a disappointment as that other Gor movie is to regular Goreans. America 3000 is just the movie we need to bring the United States back together in the wake of a polarizing and hotly contested election. Not because it offers any kind of grand, hopeful vision of the future; in fact, totally the opposite of that. Republicans and Democrats alike can all agree that the post-nuclear desert hellscape filled with knuckle-dragging cave people is a stark warning of what the other side will do to America if we give them half a chance. On the other hand, we're guessing that most people will find a society where men are kept as slaves to women and the 2nd Amendment seems to be the only law of the land[1] is sort of a mixed bag, politically speaking. But there's one overarching, beautiful idea that we can all be united behind: America 3000 is a terrible goddamn movie.

Even before we consider the premise, which is a doozy, there are several reasons that watching America 3000 should be officially recognized as an act of spiritually cleansing self-flagellation by the Catholic Church, and most of those reasons involve made-up future speak words like "woggos" and "negi" and "Merkins"[2]. One or two made-up words can make for an exotic setting, but a dozen of them is just word salad. Most of the dialogue in this movie might as well be in Esperanto, and it would still make as much sense:

Which is more unintelligible and grating: that inbred sasquatch thing's ball-gargling noises, or the Stone Age political intrigue delivered in made-up gibberish? Truly this is a riddle for the ages. Although we were at least happy to see that can of Axe body spray being found by the only being in the known universe that might actually smell better after using it.

Back to the premise, starting with that whole "women rule the world" thing. At first glance it might all sound very progressive and/or original, until you realize that the rules of their society read like a Men's Rights fever dream. The men of America 30 Hundred are forced into labor camps, branded, used as human dartboards in a particularly tragic drunken William Tell situation, and have their tongues cut out if they're too uppity. Even the sex slaves have to wear pastel-colored burqas while they do the deed.

All of this goes on for apparently several hundred years until at last along comes Korvis, a Man Going His Own Way (Into a Radioactive Wasteland Full of Scrap Metal), who founds his own village for men and kicks off a vicious gender war, while bravely overcoming his own lack of formal education by finding a picture book with at most 26 whole words in it, which is enough for him to read a detailed instruction manual for operation of a laser assault rifle later on.

Wait, laser assault rifle? Yes, that's right, Korvis manages to stumble ass-backwards into an old NORAD bunker, which has lots of ancient futuristic goodies, including an emergency bunker for the Prezident, a gold foil radiation suit, and what '80s survival compound would be complete without a boombox? All of that gives him a moderately clever idea:

Alright, well it started out as a clever idea to convince the local savages that he was the mythical god-king Prezident returned at last, but we think it sort of spoils the ruse when you say "Meet me at high noon" and then explode into a million pieces in front of the whole town. Not that it really matters, because he gives up the whole President ruse as soon as he gets the woman tribe's leader back to his atomic sex bunker where he proceeds to grab the negotiating initiative by the pussy, as it were. Love conquers all, men and women make peace once again, but tragically nobody can figure out how to ditch that stupid sasquatch thing.

In the end, the handful of mildly interesting (but mostly juvenile) ideas in America 3000 are washed away by a sea of confusion and boredom. David Engelbach made the remarkably good decision to actually have a narrator to explain what the fuck is going on for the first part of the movie, but he vanishes about halfway through, abandoning us to a hopeless morass of made-up bullshit language. If only we were smart enough to do the same.

[1] We're just guessing, since every single person in the movie is carrying at least three throwing knives, sharpened death frisbees, crossbows, or laser rifles on their person at all times.

[2] We know this is supposed to be a corrupted version of 'Muricans, but we're spelling it how they always say it in the movie. How does it feel, America, to know that in 1000 years you'll be remembered primarily as a society of pubic wig aficionados?