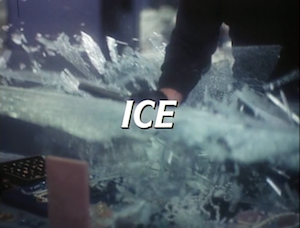 Overview: Starts out as some kind of heist movie involving criminals stealing diamonds from each other, but it just sort of degenerates into Traci Lords blazing a trail of vengeance and really obvious squibs across Los Angeles.

The Case For: If you're preparing to give up your worldly life and join a Tibetan monastery to meditate on the mysteries of the universe, Ice will give you a great head start towards clearing your mind of all those pesky thoughts. Although a lot of the cuts are so rapid that half of the scenes register somewhere on the subliminal level, so we can't promise what those are doing to your mind.

For those of you who have had the misfortune of seeing Ice, your immediate answer to the question "What the hell is Ice?" is probably something along the lines of "oh God, not that stupid Traci Lords movie," along with an immediate attempt to smash any DVD copies of Ice that might be in the vicinity. Which is a shame for Traci, because although she's the most memorable part of Ice, this particular trainwreck isn't really her fault. Okay, not entirely her fault; she certainly wasn't helping things by having the same stone-faced expression for the entire movie. But the main problem with Ice is that everything that happens is totally incomprehensible. Our working theory is that space aliens landed in Hollywood and decided to start a movie production to blend in with the locals, but then they accidentally released it.

The first premise of Ice is a heist movie about some small-time criminals stealing a bunch of diamonds from a Mafia kingpin (who is himself out of the house stealing some diamonds.) We say first premise because the heist thing lasts for about 20 minutes, and then any inkling of double-crossing con artistry goes out the window, which based on our previous traumatic experiences with heist movies might seem like great news. Except that Ice still wants to be a heist movie, it's just that Brook Yeaton and company don't seem to know how to do that, or really to put together any string of human words and actions that makes even the tiniest bit of sense. So all of the intrigue, plot twists and high-stakes games of chance are replaced with guns, guns and more guns:

We're not saying we don't appreciate the old shotgun-in-a-popcorn-bag trick, we're just wondering why the gang of diamond thieves decided that the best way to not draw attention to themselves while they're looking for a hidden $30 million cache was to just open fire in a crowded hockey rink and just start killing players and referees. Or maybe it all makes sense in the Ice-verse, because there's a definite pattern of people having running akimbo machine-gun fights in crowded public spaces and broad daylight, which nobody ever seems to notice, least of all the police.