The Summer Movie Season is in full swing this week, with a whole host of CGI extravaganzas that will boggle the mind! Martin R. "Vargo" Schneider checks in on Tim Burton's Dark Shadows, as well as indie comedy Damsels in Distress. Meanwhile, Joseph "Jay Dub" Wade talks down to the juvenile antics of God Bless America. You know what? Maybe you should just go take a walk in the park this week and wait for Battleship.

EXPECTATIONS: Yes. I certainly do have some. In fact, whenever anyone says "new Tim Burton movie," there are three facts you can predict immediately.

2: You can make a drinking game out of "Lines that will end up on Hot topic shirts."

Still, there's something about this film that's not filling me with total dread. I don't know why, but the fact that this is apparently an irreverent comedy in the vein of, say, Death Becomes Her makes me think that maybe this is more like Beetlejuice-style Tim Burton and less like Everything-He's-Made-In-The-Past-Decade-style Tim Burton.

REALITY: I'm starting to come to the conclusion that maybe we're wrong when we say that "Twilight ruined vampires." I think it's more that vampires have always been terrible, but now teenage girls like them. Ever since Lestat, there's just something catty about them, and that makes them more annoying than terrifying. They're like the drag queens of the movie-monster universe. Picture your favorite movie vampire (Even Bela Lugosi) sipping a Bloody Mary and saying "Oh, girl, you know I'm not waking up until tomorrow night!" Tell me that doesn't work perfectly well. 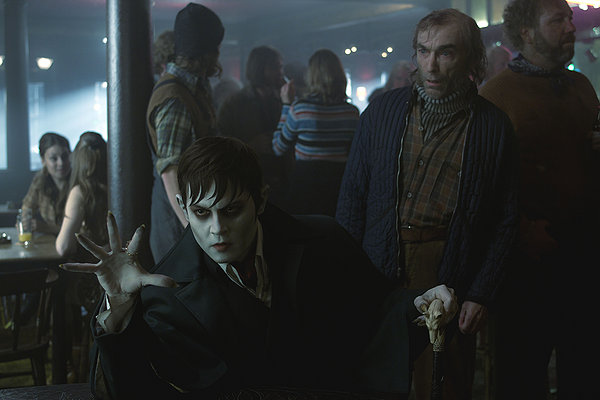 This many for The Avengers, please!

Johnny Depp plays Barnabas Collins, an 18th-century playboy who is cursed to eternal life as a vampire by a witch named Angelique (Eva Green) whose affections he's spurned. After spending 200 years in a coffin underground, Barnabas is set free by some friendly construction workers whom he proceeds to murder. Barnabas sets out to find what remains of the Collins family. What he finds is a disgraced group of town exiles that are but a shadow of the family's former glory. He sets out to restore the family's wealth and good name, competing with another fishing company fronted by none other than Angelique.

Yes, that's right, the main conflict of this movie involves two incredibly bland immortal beings vying to control a slowly dying fishing town in Maine. This is not exactly high-stakes drama. That would be fine, except that Barnabas is an extremely unlikable character in an underwhelming situation. It's not uncommon for a Burton movie to cause every other actor to stand aside while Depp futterwackens his way around the screen, but this is ridiculous.

Michelle Pfeiffer, Helena Bonham Carter and Chloe Grace Moretz all play supporting roles that are picked up and dropped whenever Depp needs them to be. For loving his family, hating Angelique, and coveting the female lead Victoria (Bella Heathcote) so much, he sure does forget that they exist most of the time. What's more, Depp's performance isn't even particularly memorable. The reason people like Johnny Depp is that he's not subtle or subdued, and here he tries to be both at times. The movie is so bipolar in tone, however, that when he does get a chance to let loose, he's just whiny and childish. 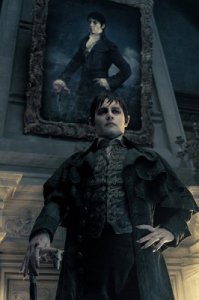 Yes, thank you. We get it. That's you.Normally I put fault with Tim Burton's films on, well, Tim Burton, but here I'm going to point my finger at another target. The screenplay was written by Mr. Seth Grahame-Smith, "author" of such works as Pride and Prejudice and Zombies and Abraham Lincoln: Vampire Hunter. The entire film is like a testament to unoriginality, and this is why. We're talking about a man who got famous by taking stories that already existed and adding superfluous supernatural elements to them. Here, the supernatural elements were already there, so Grahame-Smith had to try to add characterization and story, two things he knows nothing about. Instead he attempts "fish out of water" jokes that are just tiresome. It wasn't funny to say "Alice Cooper sure is an ugly woman!" in 1973, and it's not funny now. This is a guy who normally writes for the "Zombies r awesome lol" crowd attempting to write for the "OMG NIGHTMARE B4 CHRISTMAS" crowd. (Side note: After writing that sentence, I had my English degree revoked. Huh.)

What we're left with is an uneven misogynistic mess of a movie. I say misogynistic because this movie is all about how useless women are without a strong man in their lives. Actually, it's about how useless women are without Johnny Depp in their lives. Pfeiffer's character is unable to do anything to help her failing family until Barnabas shows up. Victoria, our female lead, frequently looks directly at the camera and says "Help me" to him before throwing herself off a cliff. The movie even does the ridiculous "I love you, make me a vampire or I'll die" plotline at the very last minute. Bonham-Carter is there to go down on Barnabas, then subsequently be murdered by him, and Chloe Grace Moretz is there to sway to music, be the subject of oddly sexual comments, and generally cultivate her "jailbait" image. Chloe, I like you, dear, but can you please just go away and come back when you're like 25, so I can look at your IMDB profile and not feel like I need to call the police on the entire internet?

Credit where it's due, Burton does show a little creativity with the "haunted house" aspect towards the end of the movie, where he decides to remind us all of how good Beetlejuice was. However, everything up until that point is just boring and lazy. Are we supposed to hate Angelique for revealing Barnabas is a murderer? Because he is. He murders people. There's no real reason for us to like or root for Barnabas Collins, other than that he is Barnabas Collins. Similarly, there is no real reason for anyone to spend money on a Dark Shadows movie other than the fact that Johnny Depp is Johnny Depp. I do find it interesting that Tim Burton essentially made a movie built upon the premise "Johnny can literally get away with murder because he's Johnny Depp and he's awesome and everyone, including my wife, wants to suck his dick." Wait, did I say I found it interesting? Awkward. I meant to say I found it incredibly awkward.

MINORITY REPORT: I have to hand it to Tim Burton, he did try to go back to his older, stronger material like Beetlejuice, but in the end all it did was make me want to watch Beetlejuice. I think I am gonna go watch Beetlejuice now. Thanks Tim! - Donald "TheBigBudgetSequel" Hallene III