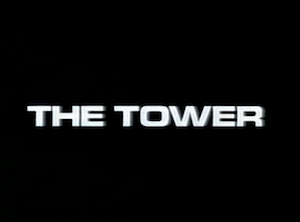 Overview: Paul Reiser is a master hacker/mediocre keyboard noodler/ignorant technophobic buffoon who, on his first day on the job, manages to get his boss killed, blow up most of the office building, destroy millions of dollars in high-tech equipment, and deliver hands down the worst a capella karaoke performance of "Bad Moon Rising" this side of a backwater Mississippi dive bar at 3 AM. Debbie in HR is going to get a stern talking to about recruiting practices in the morning, that’s for sure.

The Case For: If watching Paul Reiser getting menaced by an all-powerful malevolent building AI as payback for his stupid antics doesn't fill you with instant glee, then you might not actually have a soul.

The Case Against: The AI's idea of "menacing" mostly involves slowly moving elevators up and down while playing annoying sound clips. Also, the aforementioned unforgivable abuse of “Bad Moon Rising”, which is a major thematic element in this movie, probably because God hates us.

The Tower has to be way up there with the most aggressively stupid movies we’ve ever seen. The premise is stupid, the villain is stupid, and all of the characters put together probably couldn't muster enough brainpower to lick a window. Even the casting is stupid, because you know if you're looking for an action lead to bring some gravitas to your high-rise action techno-thriller, the first name on your list is definitely Paul Reiser. Also, maybe don't hire a screenwriter whose whole family was killed by an elevator right in front of them, because for all the ways a building might try to kill you, this movie is totally obsessed with elevators.

Basically, The Tower is an exhibition of wall-to-wall bad decisions as far as the eye can see. Not that closing your eyes will save you, because the only way to make this movie even worse is to listen to it instead of watching it. The soundtrack consists almost entirely of pointless MIDI keyboard noodling, and in fact the very first scene of the movie is Paul Reiser in a Wifebeater[1] composing smooth jams on his model M keyboard, which guarantees that your white-hot hatred for his character will only increase every time the background music kicks in.

Being the king of the slackers who lives in a synthesizer-filled basement obviously makes Paul the perfect candidate for a job at the world's shiniest, most automated office building, the Intercorp Tower. It’s probably not an overwhelming surprise that his first day on the job consists of taking his entire fucking office computer apart and putting in a "music chip" so that he could make his spreadsheets play bad MIDI cover songs while he types. Well alright, that's a pretty insane thing to do, but we knew he would fuck up royally somehow. He spends the rest of his workday antagonizing CAS, the super-advanced computer who runs the tower. CAS has the power to brew coffee on demand, read basketball scores over the PA, and of course mete out capital punishment against anyone who puts a bent ID card through the scanner one time too many.

Wait, what was that last one again? Capital punishment? Sure, why not. We're not sure how they managed to get a zoning permit for vigilante murder, but they really shouldn't have gone with the lowest bidder on installing the lethal security system, if you ask us. For one thing, the whole first half of the movie consists of CAS murdering people because it thinks they're Paul after he uses his card and walks away, which raises the question: what the fuck does it do if somebody actually breaks into the building and doesn’t have an ID card?

That's most definitely not the only loophole in the amazing Intercorp security system, mind you. CAS has total control over every elevator, ventilation fan, and sauna room in the building, but it apparently doesn't have the power to lock the front fucking door because there’s one point halfway through the film where Paul just merrily strolls right through it. Also, it really loves to trap and kill people using the elevators, but somebody forgot to put a lock on the fucking staircase which is RIGHT NEXT to the elevators, and in which CAS is totally powerless. Not that any of this stops Paul from going back into the building AND back into the elevator death-trap instead of taking the stairs, because he is just that goddamn stupid.

Normally the high-rise "action" setting would inspire some sort of Die Hard joke from us at this point, but The Tower is far too boring for us to even merit that comparison. It's Die Hard if the whole building was totally deserted, and John McClane just got stuck in the freight elevator for a few hours (in real time) and decided to sing off-key cover songs to pass the time while he waits for the fire department to show up. Actually, The Tower is worse than that because the song is an a capella duet rendition of "Bad Moon Rising" courtesy of Paul Reiser and some tone-deaf lady. We'd rather hear an all-jug band screamo cover of "Love in an Elevator" on infinite loop before enduring that scene again even once.

We’re not going to dignify the ending in which Paul Reiser hacks the Gibson with even a one-sentence summary. Basically, everyone involved in making The Tower should be filled with eternal shame. Which, come to think of it, maybe they already are, because the opening credits are plastered with extra lines of scrolling text that make it impossible to focus on the actual names. If you're an aspiring filmmaker, take note - credit dazzle might just be the remedy you need next time you end up putting out an unwatchable garbage fire on DVD. It probably won't keep you from ending up in our column, though.

[1] Great band name, by the way, although it will immediately and uncontrollably repel anyone who has actually seen The Tower from listening to your music.