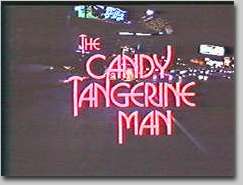 Overview: A pimp by night / loving father by day goes through downtown Los Angeles shooting and pushing his enemies out windows. Two cops try to stop his reign of terror by threatening to arrest him for loitering. Features "real Sunset Strip street people", who are incontestably the most unattractive human beings in the history of the universe. Also provides exciting scenes of pimps beating families with a broom, a car that has machineguns in the headlights, and clothing resembling a Jerry Garcia acid trip. 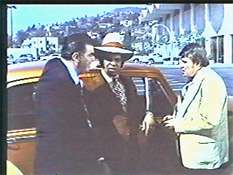 "The Baron" getting hassled by "The Man". The fat, moist, unappealing man, that is.

Pimpin' ain't easy, but judging by "The Candy Tangerine Man", it is very convoluted and requires a whole shitload of killing. A streetsmart hustler named "The Baron" is intent on reclaiming his role as "Most Embarrassing Example of the 1970's" from rival pimp Dusty Compton. He accomplishes this by killing off almost every major character he runs across.

"The Baron", who's real name is either not given or I've forgotten, pimps his hoes (the women, not the garden tool) as soon as the sun goes down, then returns to his loving, caring, unbelievably gullible wife in the early morning. She accepts his excuse of "working late for some clients" every night when he's actually out pushing people over railings and buying new hats with feathers sticking out of them. His wife takes care of the children, but their afros are too large to fit in frame so the director chooses to show very little footage of them.

The pimping industry for The Baron is clearly booming, at least until rival pimp Dusty Compton tries to move in on his territory and steal his bitches. Dusty instills an intense fear in these ladies by getting one of his henchmen to press a plastic knife against their breast and smear fake blood all over it. After catching word of this evil plan, The Baron decides to respond by pushing a fat man over a railing and sticking the guy's hand into a garbage disposal drain. In a scene which comes out of nowhere and introduces a character that has nothing to do with the movie, one of The Baron's jive-turkey pals somehow finds $150,000 worth of bank bonds and brings them back to him. Where did he find them? I don't know. Why did he bring them to The Baron? You got me. The movie basically says "OK, here's the fucking plot, now deal with it." So our hero gets one of his hoes (not the garden tool) to turn tricks for a banker in order to cash the bonds and spend it all on experimental surgery to make his hookers even uglier. At least that's what I assume, as The Baron's sluts look like Joe Don Baker's female counterparts (only with more craters in their faces). 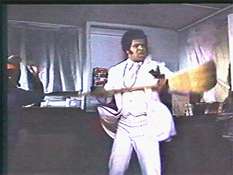 A broom is the weapon of choice for many streetsmart pimps.

Adding to the already intensely complex plot, two crooked cops are looking to bust The Baron for various pimp-related charges. Luckily for hustlers everywhere, these two fine specimens of molded lard have the combined intelligence of aluminum alloy. The Baron will go on a killing spree, slaughter 15 rival gang members, and then the cops will show up three second later and arrest The Baron on some sissy charge like double parking. The policemen are killed after they engage in one of the worst car chases in history, with both The Baron and the cops' cars reaching blistering speeds of up to 20 miles an hour. The "action sequence" is not even in sequence, the voice over acting ranks up there with Voltron, and night / day shots are randomly interchanged for no reason. When the cops' car spins out of control for the eighth consecutive time, they find themselves balanced precariously on the edge of a cliff and are unable to escape because, for some unknown reason, the doors are jammed shut. The film never really bothers to explain why. I would just rather assume the actors were too stupid to figure out how car doors open and the director had to write around it.

After pushing their car off the cliff, sending the pigs to a fiery death, The Baron has to chase down one of his ladies that stole the $150,000 while he was out. He hunts her down to a one-bedroom shack she's sharing with her family, a toothless gang of harpies. They swarm after him and he responds by beating them all with a broom. Eventually he gets his money back, goes home, and tells his wife he's quitting "work" to spend more time at home. I'm not really sure why he decides to do this, as his wife is an incredible bitch. 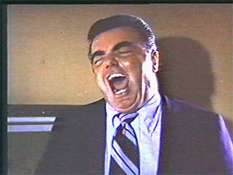 Is he laughing? In pain? Passing a stone? Who knows.

"The Candy Tangerine Man" is an amazing showcase of everything embarrassing in the 1970's. The writing, acting, and plot are below even B-movie quality. Matt Cimber, the war criminal responsible for this mess, saved a good chunk of change by opting to use recycled newspaper instead of film to record this movie. Many scenes are blurry, out of focus, convoluted enigmas that feature characters who are indistinguishable from surrounding scenery. The "real Sunset Strip street people" are so damn ugly Rosie O' Donnel could make more money turning tricks than them. One of the few saving graces this movie has is the porno quality music which made me want to whip out my dick and... well... cut it off after I saw the "real Sunset Strip street people." Rent this film only if you hate yourself, the 1970's, or humanity in general.