Anime Convention Personality of the Week! 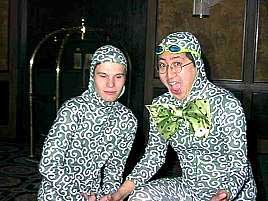 Anime Convention Personality of the Week!, submitted by Jim Snaps. When the world we know now is consumed by lava, earthquakes, and water, vast cities and cultures will be lost to the ages. After time, archeologists will return to these decimated lands and work at uncovering what was lost. Layer by layer they will dig through the strata, finding puzzle pieces each depicting a facet of our way of life. Then they will invariably stumble onto the layer containing the remnants of anime fan conventions, a mangled mess of colors and cellulite still slimy from all the oily skin buried therein. It is then that they will give up on uncovering the past, declare it monstrous, and vow never to allow such horror to happen again.

But before our brothers in the future can do the right thing, we are forced to live in a world where people not only dress up as anime characters, but go out in public in costume. And not just for Halloween. It is nothing new of course, and has been going on for years. It does, however, remain timeless in its sadness.

Each week this site shines the spotlight on one or more of the many amazing personalities to frequent anime conventions. Basically this reads like America's Least Wanted on Every Conceivable Level. For instance...

If you recall the old Smothers Brothers "Mom always liked you best" routine, then you understand Chad and Brad - only that Mom, in this case, made a Shinji Ikari plug suit for one of her sons. These two anime-loving brothers have haunted conventions on the East Coast for the last few years, from Georgia to Virginia. They're supposed to be twins, but you can tell these two apart. Chad is the crazy guy in the costumes. Brad wears glasses and appears more restrained - on the surface. Just wait until the dance floor opens for the real Brad to appear.