The Mechanic; The Rite

Even bad films (like the lacklustre Jason Statham vehicle The Mechanic and the exorcismploitation trifle The Rite) make a statement. We take time out of our obnoxiously busy schedules to explain what these movies had to say.

EXPECTATIONS: I would describe myself as a fan of Jason Statham. I've heard him called the new Charles Bronson (personally, I've always considered him to be the new Steven Seagal), and that is certainly being reinforced here with this remake of the largely forgotten Bronson vehicle The Mechanic. I've never seen the original, so prior knowledge will not mar my viewing experience. That said, this remake is directed by Simon West, whose best effort to date is Con Air, a movie that stands tall on the strength of its script (copy/paste to "phrases i never expected to read.txt" - editor's note) and a great ensemble cast, but has all the aesthetic flair of a two-year-old's first finger painting.

REALITY: I believe in the magic of cinema, that mystical force that can take incredibly abstract ideas and weave them subtly into a visual narrative. On that note, I have no idea what to think of The Mechanic. It explores some interesting and amusing ideas whilst playing up to the established persona of its star, but it manages to do all of this in the process of being a slightly dull series of increasingly violent and tenuously connected scenes.

Arthur Bishop (Jason Statham) is a mechanic, which means he is a hitman. I don't know how that particular jump in logic is made; presumably he has to turn away people who have car problems on a regular basis while the actual mechanics have to deal with creepy government types who want drug barons taken out in a clandestine manner. Anyway, one day he is assigned to kill his old friend and mentor Harry McKenna (Donald Sutherland) on the grounds that he is leaking secret government information to... somebody. In spite of the amicable nature of Bishop's murdering McKenna, Harry's estranged son Steve (Ben Foster) soon comes sniffing around with vengeance in mind. Driven by guilt, Bishop takes Steve under his wing and trains him to be a mechanic.

The relationship between Bishop and Steve is at the forefront of this film. They depend on each other to some extent; Steve basically lives off Bishop like a useless teenage son, eating his food and draining his income. Bishop needs Steve around because he sees in him a chance to atone for killing his dad. However, their relationship seems to go much deeper than that, with suggestions of repressed homosexuality and a romantic interest between the two leads that they can only express through violence. 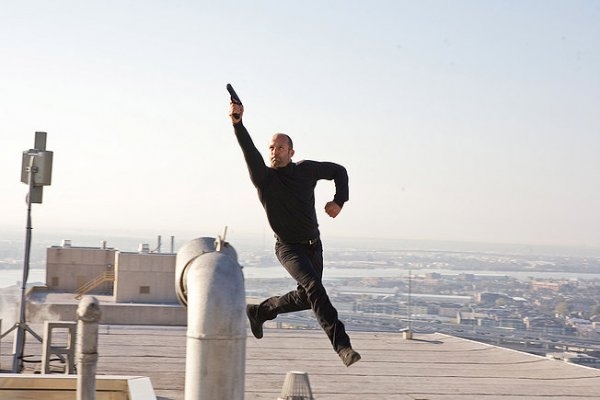 In one confusing and controversial scene, Statham actually flies into Heaven and shoots God in the face.

There is one sequence, not too far into the film, in which Bishop gives Steve his first assignment: He must seduce a rival mechanic and give him an overdose of date-rape drugs to kill him. Steve's frustration and eagerness cause him to engage the guy in a straight fight, which gets bloody and brutal. In fact, it reflects the previous scene in which Steve watches Bishop strangle a man to death and disguise it as auto-erotic asphyxiation. Just think about that for a moment; Steve essentially witnessed Bishop bringing another man to orgasm and felt the need to repeat that. Instead of giving his target the drugs as ordered, he removes the guy's belt and attempts to strangle him with it.

There are two actual sex scenes in the film, each involving one of the male leads and a nameless female. Juxtaposed with the horrific murder scenes, these are emotionless and uninvolved, whereas they get very into killing people, especially when together. This subtext draws itself out to a logical conclusion when there is nobody else to kill and they need to satisfy their urges and feelings for each other. But it all just feels a little unsatisfying.

The Mechanic is one of those films wherein the subtext is infinitely more interesting than the surface story. That can be fine in some instances, but this is an action film starring Jason Statham, and as such it really should be a more visceral experience. The audience should care about the protagonists succeeding, they should hate the bad guys, and my God, there should be a climax of some sort. Instead, we get a very loosely connected montage of brutal murders, perpetrated with the laziest of motivations. Steve goes from shooting a few targets in the woods to being a super-fast deadeye with any weapon he picks up, and it's hard to accept or enjoy any of this stuff because it's just thrown at you without any real concern for the audience's emotional reactions.

At one point, a character appears whose only purpose is to remind us of the plot from the first act and explain the plot twist so we can move into the third act. He is literally the exposition guy, and Statham even gets to kill him in a ridiculous fight aboard a bus. Having murdered the plot, he and his new partner go and viciously massacre the remaining characters who he assumed were the good guys at the beginning and are now the bad guys. It's nonsensical and boring. We have absolutely no reason to care about these characters dying, because all they've managed to do is make Statham's character look a bit stupid.

The whole experience is like eating a pie with a cardboard crust. You take one look at the crust and think "I'm not eating that, it's not a real pie." Then you realise it has a delicious filling, but you can never quite get that cardboard taste out of your mouth. Here, Simon West - a director who previously seemed uninterested in exploring the subtleties of layered storytelling - goes so far into subtlety that he forgets about the surface details. It's great that we can have an intellectual exploration of the dangers of repressed sexuality in the middle of this action film, but can we still have the action film?

Time will be the greatest test for this film. In years to come, your own sons will be sitting around on their fat arses, drinking beer and marathoning Jason Statham films. They'll bemoan the lack of a great action icon like Jason Statham for their own generation, and they'll take a shot every time he calmly walks away from a dead body (he does this so many times, I lost count). They might even get a good laugh at the gay subtext. But if I had to speculate on where they'd rank this in the Statham canon, I would imagine they'd put it quite near the bottom.

MINORITY REPORT: The Mechanic: Two parts The Professional, one part A Perfect Murder and a dash each of Hitman, Basic Instinct and Baise-moi. Place ingredients in blender, puree until it's creamy smooth, pour into cardboard crust, bake at 450 until it's burnt to shit and forget to take it out of the oven. Voila, the perfect recipe for a late-January cinematic shit pie. - Sean "jeremy cunt" Hanson