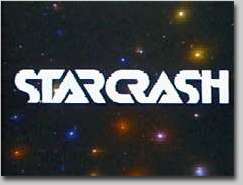 Directed By: Luigi Cozzi (who also goes by the name Lewis Coates), 1979 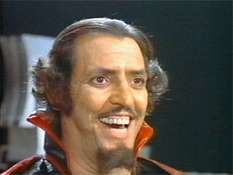 Can't get enough "Star Wars"? Looking for another outer space adventure that has basically the same plot, characters, and about 1/100th the budget? Well look no further, as "Starcrash" is the perfect, sanitized, K-Mart version of "Star Wars" you have been looking for your entire life. Okay, maybe not your entire life, but at least during the times you had been spraying pesticides upwind from yourself.

All is not well in a deep and far-out corner of the universe. An evil, diabolical, somewhat homosexual dictator named Count Zarth has constructed an "ultimate weapon" that shoots red blobs all over the immediate area. We are shown the sheer power of this gun in the opening scene when an innocent trading ship comes under attack by the terrible Count. Red taffy immediately surrounds their ship and the crewmembers suddenly fall to the floor, clutching their heads and screaming in pain while random shapes are projected in the front of the camera. These "monsters" (yes, according to the movie the gun shoots out "monsters") are somehow able to destroy entire planets and ships. At least that's what the movie claims, we never actually see an example of this happen. The blobs attack one ship and supposedly kill them all, then try to attack the ship housing our heroes (who are somehow able to defeat the "monsters" by grimacing really hard and falling over repeatedly). Frankly, I've seen more powerful "ultimate weapons" in a retirement homes. 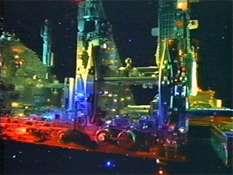 Oh no, even space stations aren't immune from vandals with spray paint cans.

The protagonists, a couple of space pirates named Akton and Stella Star, kick start the movie by desperately trying to elude the "Imperial Police". They do this by flying through space in a straight line, which doesn't seem to be incredibly effective, so they go a bit faster. Somehow the police are able to track and continue chasing them, so Akton pilots the pizza-slice-shape of a ship into "Hyperspace", which looks a lot like normal space only it's blurrier and contains a higher concentration of 1970's computer vector graphics. They drop out of hyperspace and come across an escape pod from the ship that was attacked in the first scene. After psychically communicating with the ship's lone survivor (Akton holds the guy's wrist and says what he's thinking), he asks them to contact the "The Emperor of the First Circle of the Universe" and tell him about the terrible red blobs that are flying around the galaxy and giving men in white jumpsuits migraines.

Unfortunately, the Imperial Police find the space smugglers (their ship must be able to fly in a straight line really fast too) and immediately arrest them. I'm not sure exactly what they did that was illegal, the movie doesn't bother supplying this insignificant portion of backstory. I'd like to imagine they broke the law by cyber smuggling space glue through the virtual planetary neutral zone. The evil Count Zarth learns of this lone survivor and decides to order his really squeaky, dangerously incompetent, aluminum foil robots to do something vague. The director shrewdly chooses to leave out what orders the robots were given by Count Zarth. Here's how the crucial scene goes (I am not making this up):

Count Zarth: "I have a simple task for you. You must not fail me."