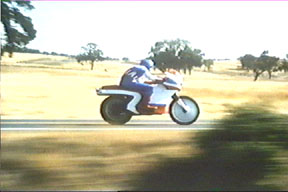 Captain America zooms gallantly to his destiny which consists primarily of jumping to his doom off of a very high dam.Unfortunately, Steve is unable to escape town without being detected, so as Captain America, he is chased by a horde of black jeeps and police cars through the countryside. As they near an enormous dam, the Captain has a brilliant idea to JUMP OVER THE SIDE OF THE RAILING ON HIS MOTORCYCLE THEREBY PLUMMETING SEVERAL HUNDRED FEET TO WHAT SHOULD HAVE BEEN HIS DEATH AND RUINING HIS ONLY FORM OF SUPERHERO TRANSPORTATION. The police and goons both assume that there is no way that he could have survived the drop, and in ordinary circumstances they would be correct, but they must have forgotten that they were talking about Captain America, because Steve-o is back and rockin'.

To make a long story, short, Steve and the farm lady find where the terrorist is hiding and the Captain goes to foil his dastardly deeds. This part of the movie involves Mr. America riding through the hallways of a prison as well as some very angry dogs who vary in number from five in one scene to two in the next. There is of course a confrontation after a tedious hang gliding scene between Captain America and Miguel the terrorist where Miguel is thwarted and dumps the aging juice all over himself. He becomes an old dude in seconds and dies. Hooray! Go Steve!

The movie ends with Steve painting the farm lady riding a horse while her child sits close by. How sweet and creepy. 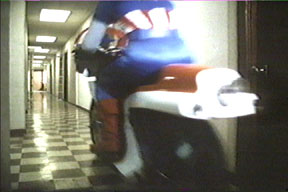 The good Captain rides heroically through the hallway of a children's mental institution thereby causing numerous relapses and injuries.

This movie disturbed me on so many levels. The first of these was that this movie was a sequel. In keeping with the rule that sequels are worse than the original movies, I would assume that the first Captain America movie would have to be a great deal better than this one. But the original would have to be the best movie ever in order to even at least partially make up for the sin of it's pathetic offspring. The other thing about this movie that really bothers me is the probably-not-original beef I have with a super hero called "Captain America." Not only is he the lamest superhero ever (even lamer than Aquaman), but he has a really strange bulge in his crotch and I can't even begin to guess what might be down there. It ain't patriotism, I'll tell you that much.

Mainly, this movie just made me sad. It made me sad to think that so many people could all work on the same project for seemingly so long and no one ever got tipped off that they were making crap. I guess that that's the way things go with bad movies, but I mean, come on. Steve!