A little over a week ago I posted an update on Something Awful in response to a deluge of mail I received after an Awful Link of the Day about a stillborn baby shrine. After that update the email dwindled to a trickle of legal threats. However, one of the women involved tracked down my instant messaging info and the harassment by angry quasi-mothers began on a whole new front. For the most part I ignored their messages or replied with one-liners that sent them into apoplectic monologues, but I toyed with a few that seemed particularly stupid or goofy. This is the story of one of those women. This is the story of "Udreamofjeanie". 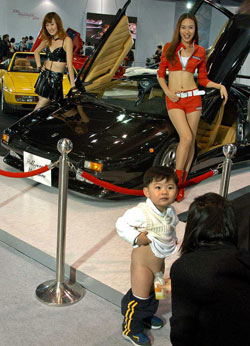 Udreamofjeanie: Are you the @$$hole that has been harassing the mother's of angels?

Udreamofjeanie: it says in ur info that you are zack parson you wrote a disgusting article about women who where greaving very seriously for their lost loved ones!

~Connor~: Lord no! My name is Dakota Parsons. Maybe you mean my son, Zack.

Udreamofjeanie: u should read this then http://www.somethingawful.com/articles.php?a=2538 this is what your son wrote and it is very hurtful. if he were my son I would show him some disipline.

~Connor~: Well Jeanie, I don't hit my children. I have very soft hands. When my husband gets home from work I will ask him to put the fear of God into Zack. I will just turn my music up loud again.

Udreamofjeanie: Thx a lot Dakota. there are some very upset mothers.

~Connor~: Is there anything else I can do?

Udreamofjeanie: have him take the article down and apologize

~Connor~: I don't think he'll apologize. Zack has been in this sort of big trouble before and he is very stubborn. It comes from being bullied.

Udreamofjeanie: LOL I culd tell that he was bullied!

~Connor~: Yes, it's because of his condition. All of the abuse has made him a mean person and he gets into a lot of trouble.

Udreamofjeanie: What sort of condition?

~Connor~: Last week he spent the night in jail for vandalizing the nativity scene downtown. He broke the Baby Jesus with a hammer.

~Connor~: Oh, his condition is very serious he has to go for regular treatments to the doctor and at night he has to be hooked up to a special IV.

~Connor~: It is very hard on me. He does not sleep well and that means I don't sleep well. I have no free time and Huck and I hardly even talk to each other anymore. I feel very alienated from my husband and that is not a good way to have a marriage.

Udreamofjeanie: no its not what is his problem?

~Connor~: He has a very rare skin problem that the doctors are still trying to repair. Or do you mean Huck? If you mean Huck I just don't think he has enough time. He always finds extra work to do because he doesn't like to be around Zack. He thinks that he somehow failed because of Zack's skin problem.

Udreamofjeanie: well try and talk to him and ask him to take his article down

~Connor~: Are you married, Jeanie?

Udreamofjeanie: Yes i have a husband for 3 years in january

~Connor~: That's so wonderful! And did you give birth to any angels?

Udreamofjeanie: NO MY SIster had vive miscarriages and she told me about your sons homepage

~Connor~: Sometimes at night I lay awake in bed and wonder where Huck is. He tells me he's working, but I just don't know anymore. It's so hard for me to believe, but I can't think he would cheat on me. I just get lonely, and with Zack's condition I don't know what to do.

Udreamofjeanie: i get lonely some times 2 cuz my hubbie works third shift

~Connor~: I bet. It sounds like you know exactly how I feel. See, sometimes women just have to help each other out. Do you know what I mean?